In the Season 2 trailer for “Only Murders in the Building,” which Hulu released Tuesday, the podcasting trio (played by stars Steve Martin, Selena Gomez and Martin Short) who are all now persons of interest in the murder of Arconia Board President Bunny Folger (Jayne Houdyshell), find that a masked individual has been planting evidence in their apartments. And is he also following Mabel (Gomez)?

The plot thickens as they size up suspects, including Bunny’s imperious mother (Shirley MacLaine). “Do you think that woman stabbed someone eight times?” Mabel asks while they watch the 80-something character struggle to slice cheese, and Oliver (Short) replies, “We’ll put a pin in her for now.” 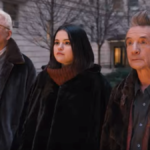 “Only Murders in the Building” is from co-creators and writers Steve Martin and John Hoffman. Martin and Hoffman executive produce along with Martin Short, Selena Gomez, Dan Fogelman and Jess Rosenthal. 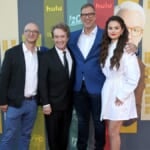