Hulu’s killer comedy series “Only Murders in the Building,” is only going to get zanier in Season 2, according to showrunner, co-creator, writer and executive producer John Hoffman, who teased what’s next in store for the Arconia trio during Saturday’s FYC Fest at the El Capitan Theater in Hollywood.

“If you like Season 1, I will guarantee a real amazing, elevated corker the whole way through — it’s quite something,” he told the crowd during a panel conversation, adding in half-jest, “I just think what you felt in Season 1 was these three people coming together in very unexpected ways, and now there’s a groove they’ve found that matches with what we saw on set happening, this familial thing that happens — even though some wanted to murder others.”

Hoffman was joined by stars and executive producers Selena Gomez and Martin Short, as well as cast members who appeared virtually: Amy Ryan (Jan), Nathan Lane (Teddy) and James Caverly (Theo). Steve Martin was absent at the conversation, which was moderated by the Hollywood Reporter’s Scott Feinberg. Short hilariously took advantage of Martin’s absence, throwing digs at him and drawing uproarious laughs from the audience — and panelists — in the process. 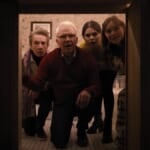 Attendees were treated to screenings of Season 1 episodes “The Boy in 6B,” told mostly through Theo’s perspective, and the finale “Open and Shut.” Referencing his episode, Caverly signed that he was initially “terrified” about having to “carry this story” entirely. However, after surmounting that fear, he added that it was an “honor” to do so, thanking Hoffman, Gomez, Short and “that other guy” for giving him the creative leeway as a performer.

“It was really shocking to me that after the show was over and even until this day, people come up to me and say that this is one of the best episodes of not just this entire season, but all of the television shows they’ve seen on Hulu,” Caverly signed.

Season 1 ends on the stunning cliffhanger of Bunny’s (Jayne Houdyshell) murder via knitting needle, with the police arriving to collect Mabel (Gomez), Charles (Martin) and Oliver (Short). Hoffman said that the twist was envisioned from the very beginning of the pitch process, and these “newbie investigators are now finding themselves suspects in a new murder and the subjects of a podcast done by their heroine [played by Tina Fey].” However, as for solving the case in Season 1, the answer actually came much later in the writing and filming process.