“If a song just calls for a bare stage and a pin spot,” said Adam Shankman last month, as he considered a likely Best Original Song nomination for “The Weary Kind” from “Crazy Heart,” “we’ll use that.”

The Academy confirmed on Tuesday afternoon that Shankman and his Oscar show co-producer Bill Mechanic have decided not to invite the Best Original Song nominees to perform on the 82nd Academy Awards show. Instead, the category will be illustrated by film clips, the way most other categories on the Oscar show are handled.

The song nominees have been a thorn in the side of Oscar show producers for years, often sandwiched into medleys, cut down to 90 seconds each, or used as a showcase not for the original performers, but for more recognizable stars like Beyoncé.

But apart from the Eminen song “Lose Yourself,” which at the composer’s request was not performed on the 75th Oscar show, the nominated songs have been performed on every Oscar show for the past 20 years. 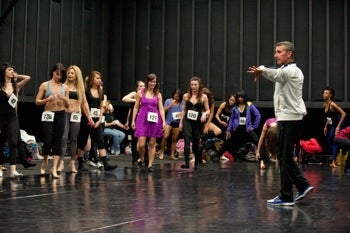 Still, Shankman is definitely planning other musical interludes: he’s announced on Twitter that 69 dancers will appear on the Oscars, including at least 13 from the show on which he appears as a judge, “So You Think You Can Dance.”  (Right, Shankman auditions dancers in late January. )

A spokesperson for the show also says that Shankman is planning "something different" for the score category, which will result in additional time showcasing the music branch’s other nominees.

A promotional video released by the Academy last week shows Mechanic and Shankman, at a production meeting, talking about a rundown of the show that includes “three songs that we don’t know if we’re even going to have.”

Presumably, that would have been two medleys, plus a solo performance of “The Weary Kind.”

Ironically, the Academy music branch process that was designed to make sure that the nominated songs are integral to their films may have made it easier to knock the nominees off the show. Voters view clips of how the songs are used in each film, a system that often results in most or all of the nominations going to songs that are performed onscreen.

This year, all five nominated songs were performed by real or animated characters onscreen, making it easy for Shankman and Mechanic to cut out the nominated artists while also showing a bit of their songs’ performances.

Besides "The Weary Kind," which was written by Ryan Bingham and T Bone Burnett, the nominees are two Randy Newman songs from "The Princess and the Frog," "Almost There" and "Down in New Orleans," which are performed in the film by Anika Noni Rose and Dr. John, respectively; "Loin de Paname," a French-language song from the film "Paris 36" performed by Nora Arnezeder; and  "Take It All" from the musical "Nine," which is performed onscreen by Marion Cotillard.

The winner here may be “The Princess and the Frog” — which, with two nominations, will get a good chunk of two key musical numbers on the show.

The losers will be Bingham, who co-wrote and performed “The Weary Kind” over the end credits, but is not seen in any footage likely to be used; and Anika Noni Rose and Dr. John, who performed the two “Princess and the Frog” songs but will no doubt be replaced by animated characters if footage from the film is used.

I can only hope that Shankman’s dance numbers will not be set to the nominated songs; if some of the musicians are disgruntled now (and they are), the idea of being replaced by a TV dance troupe will make matters much worse.

And I can’t help but think back to the last time the nominated songs were not performed on the Oscars. That particular show used a whole lot of dancers, too: it was the 61st Academy Awards, produced by Allan Carr.

The show was widely criticized as the glitziest, silliest Oscar show ever (you may remember it for Rob Lowe and Snow White), and it led to the formation of a special Academy committee and an overhaul of how the Oscars are produced.

I’m not saying that Shankman and Mechanic are necessarily heading down that road, just that there’s some scary precedent for not performing the songs.

Since you won’t see him on the Oscar show, here’s a video of Bingham performing “The Weary Kind” at a “Crazy Heart” press day, followed by one of Jeff Bridges doing the song on ABC News Now

If you ask me, a bare stage and a pin spot would have been just about right for a pretty terrific Oscar moment.

ADDENDUM: The original version of this story indicated that the Academy had not responded to a request for comment.  After the story was posted, AMPAS confirmed the change, and the story was changed to reflect that confirmation.