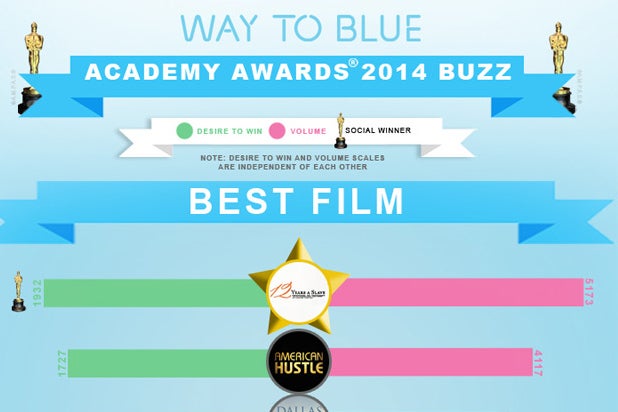 If Twitter buzz was the sole indicator of Oscar night winners, then “12 Years of Slave” will be taking home Best Picture on Sunday, according to a new survey conducted exclusively for TheWrap.

Ahead of this weekend’s ceremony, global communications agency Way To Blue examined tweets referencing the nominees in the biggest Oscar categories from Feb. 21 to Feb. 27. They counted not only how many Twitter users were discussing each nominee, but who the public wants to win in each category — referred to below as “Desire To Win.”

For example, not only did “12 Years” score the highest volume of overall buzz (5,173 Twitter mentions), it also topped the Desire to Win ranking, scoring 1,932 mentions. Not all of them worked out so perfectly.

Let’s see if the Academy agrees with the tweeting public on Sunday. In the meantime, take a look at the infographic predictions: