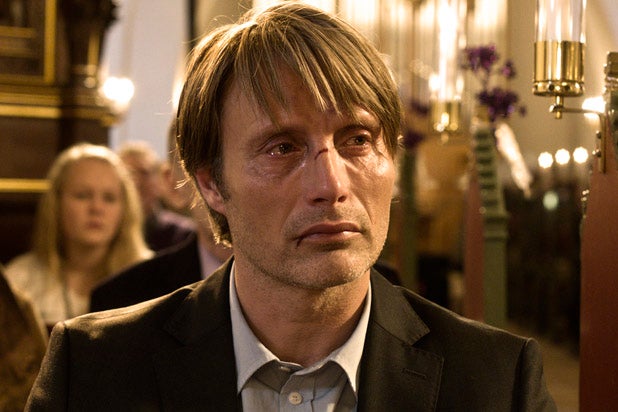 A version of this story originally appeared in OscarWrap: Foreign Language/Documentaries

Thomas Vinterberg‘s “The Hunt” premiered at the Cannes Film Festival back in 2012, but it got its biggest visibility in the United States with an Oscar nomination almost two years later. An unsettling drama about a mild-mannered schoolteacher falsely accused of molestation by young girl, the film won Mads Mikkelsen the best-actor prize at Cannes, and has picked up a variety of prizes since then.

The 44-year-old Vinterberg has been making films since the early ’90s, but before “The Hunt” he was best known as a co-founder, with Lars von Trier, of the Dogma movement that attempted to set rules that would bring filmmaking back to a minimalist aesthetic. His most acclaimed Dogma film was 1998’s “The Celebration” — which, like “The Hunt,” deals with allegations of child molestation. (In that film, they turn out to be true.)

TheWrap spoke to Vinterberg (right) from his home in Denmark after he received an Oscar nomination for the film.

The film is based on a file that was given to you by a psychiatrist years before you made the movie. What made you go back to the material?
I needed a psychiatrist. I’m not kidding. I read the case he gave me because I was going to visit him. And I was sort or ready. Right after having done “A Celebration,” I needed a couple of years off that subject. But I guess he almost thought it was a responsibility for me to do the antithesis of that.

I do have to say, the case he showed me was not what was so important about this film. I hope this film contains more than a case story. For me it’s about love and friendship and forgiveness. It’s a modern witch hunt to some degree, which hopefully has a broader appeal.

How close did you stick to the facts of the real case?
Very close, and not very close. For legal reasons, we had to combine stories from all sort of different cases, to not breach any privacy. And also we had to do a very important and crucial dramatic move away from reality. Reality is much more grim — this is the airplane version.

In the cases I read about, most ended up with 20 to 30 people in prison. Because this mass hysteria spread out. They said, “That could not have been done by one person, this must have been a chain of people,” blah blah blah. But to put dramatic pressure on one main character, we changed it to one person being accused.

In one of the cases I read, 18 children were being interrogated, and in detail they said the same thing about a basement that they’d been punished in. They described the color of the walls, and they were all in sync. And then the police went to search of the house, and there was no basement. This collective fantasy of a demon is deeply, deeply fascinating, I think. That was one of the things that made me really hooked on this.

The town in this film is quick to condemn and quick to forgive. Do you think that’s true to what can happen in cases like this?
I think so, and I hope so. Maybe I’m naïve. But I think that there’s very often a communal and collective consensus about whether people are guilty or not, and these things can change overnight. And now, with all the social media platforms, a person’s identity can be changed in the flicker of a second.

You dealt with the subject of this film in “The Celebration,” but the style here is very different from the Dogma style of that film.
What we wanted to do back in the ’90s with Dogma was to undress the film, and make a naked, truthful experience out of it. I considered doing the same thing with “The Hunt,” which is in some ways a mirror of “The Celebration,” but Dogma was such a great success that it became a fashion. Instead of getting naked, it was like putting on an old dress. I wanted this film to be as naked and truthful as possible, because this was a film about truth and lies, but I had to find a new way of doing it.

So we wrote and filmed the scenes in a way where sometimes the camera is there too late, sometimes it’s too early. Like if the camera wouldn’t have been there, it would have happened anyway.

Didn’t you originally want to shoot the film in America?
For a couple of hours. That’s how long it took to get through to my American agent, who said, “Forget about financing this theme in this system.” But somehow the film got bigger and more universal for being something I made in my back yard. I’ve seen some really profoundly moved audiences on your side of the planet.

[laughs] Although they all say, “Why didn’t he hire a lawyer?” But that would be very unusual in Denmark, because everyone would assume he was guilty.

We made an artistic choice: This is not a chase story. This is about love and friendship. No police, no courtrooms, no press, no lawyers. This is about human life.

Since you made “The Hunt,” you’ve shot a version of “Far From the Madding Crowd” with Carey Mulligan for Fox. Do you want to make Hollywood movies?
Well, I guess my new film is a Hollywood movie, since it’s a Fox movie. I’ve worked in England, I’ve been working in Denmark, I’ve made theater very successfully in Vienna. So yes, I could definitely work in Hollywood.

For me, film is universal, and so far I’ve had great fun working in the Hollywood system. Although it’s not over yet.