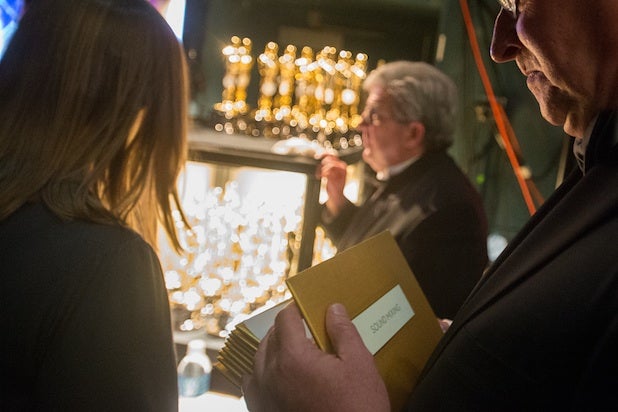 More than a year after four of the documentary nominees debuted at Sundance, almost nine months after the first of the Best Picture nominees premiered in Cannes and five weeks after nominating ballots were turned in, final voting for the 86th Academy Awards has begun.

The polls officially opened at 8 a.m. PT on Friday, when Academy members were first allowed to vote online. (Voters who requested paper ballots received them early, and some have already voted.)

The homestretch has finally arrived in a long, tough, competitive year, and a year in which the four major Hollywood guilds have spread their top prizes among an unprecedented five films.

As voting begins, “12 Years a Slave,” “Gravity” and “American Hustle” seem to be locked in one of the tightest races in years, though the guilds’ failure to reveal a frontrunner, and the huge gap between the close of nominations and the start of final voting, mean that anything can happen.

So I have a few questions. I don’t have answers to these questions, but I want to ask them anyway.

1. Have voters spent the last month watching everything?
It has been 29 days since Oscar nominations were announced. That’s 696 hours in which Academy members could presumably catch up with the films they had yet to see from the slate of nominees, which consists of 32 narrative features, five documentary features, five foreign-language films and 15 shorts.

If you figure that most conscientious voters had already seen a good number of the nominees (if not, they wouldn’t have been nominated), those 29 days ought to have been plenty of time to catch up.

And the Academy has helped. Since the nominations were announced, there have been 87 AMPAS members screenings in Los Angeles, 13 in New York and 13 in London. Voters have screeners of most if not all of the nominated films, and their membership cards will get them in to many public screenings.

So there’s really no excuse for not seeing everything .. except, I suppose, work and family and stuff like that.

2. What about “Bad Grandpa?”
You’ve gotta love the Academy’s Makeup Artists and Hairstylists Branch. Year after year, they nominate movies that have great makeup, but aren’t exactly occupying space on many year-end Top 10 lists. There was “Norbit,” “The Wolfman,” “The Time Machine,” “Click” and a number of others.

And this year there’s “Jackass Presents Bad Grandpa,” in which Johnny Knoxville is disguised as an old man to annoy innocent bystanders. The makeup not only looks good onscreen, it apparently fooled people in real life, making it eminently worthy of a nomination in the category.

But are Oscar voters really going to go to “Bad Grandpa” screenings, or pop in the DVD?

I’m not sure, but I think they might. I asked some Academy members if they were planning to watch the film, and responses ranged from “yes, and I’m looking forward to it” to, “I will if they send me a screener.” And yes, Paramount has sent screeners.

Besides, the film has a decent 61 percent favorable rating on Rotten Tomatoes, more than double the rating of its fellow nominee “The Lone Ranger.” (The last nominee is “Dallas Buyers Club.”) It was co-written and produced by Spike Jonze, who has three nominations for his work on “Her.” And its cast includes Oscar nominee Catherine Keener.

But I do have a “Bad Grandpa” follow-up question: How many Academy voters who start to watch the DVD will make it past the opening-credits scene, in which Knoxville’s character gets his penis graphically stuck in a soda machine?

3. How will the new rules affect the documentary and foreign-language races?
Late last week, Academy members received boxes containing all the nominated documentary features, foreign-language films and animated, live-action and doc shorts. Some members grumbled that they would have liked to receive the box earlier, rather than getting it only a week before voting started.

But it still gave them more than two weeks to see 10 film and three shorts programs. Will they?

At stake is the new system of determining winners in the foreign-language category, and the second year of that same system in the doc-feature category. In the past, members couldn’t cast ballots in the categories unless they’d seen all five nominees in a theater – but now they can vote regardless, with viewing on the same honor system that’s in place in every other category.

But over the years, the documentary and foreign categories have had a number of surprise winners that can be directly attributed to the fact that voters had been forced to see all the nominees before voting.

“The Lives of Others” director Florian Henckel von Donnersmarck, for instance, recently told TheWrap that he is convinced his film would never have beaten Guillermo del Toro‘s far better-known “Pan’s Labyrinth” if viewers hadn’t been required to see it – and you could say the same about the chances that “The Secret in Their Eyes” would have beaten “The White Ribbon” and “A Prophet” in the foreign-language category, or that “Taxi to the Dark Side” would have beaten “Sicko” in the doc category.

This year, many members and Oscar watchers figure that the results in the two categories will show whether or not voters have watched all the nominees. And the key test, many agree, will be the documentary feature category.

If “20 Feet From Stardom,” by far the best-known nominee, wins, it’ll be seen as a clear sign that voters cast their ballots without seeing everything; if “The Act of Killing” or “The Square” wins, it’ll be considered proof that they were conscientious.

4. Have voters changed their minds in the last month?
Judging by the nominations, Oscar voters on Jan. 16 – or, more accurately, on Jan. 8, when polls closed – liked “Gravity” and “American Hustle” best, followed by “12 Years a Slave” and a three-way tie between “Captain Phillips,” “Dallas Buyers Club” and “Nebraska.”

(Of course, the Best Picture nominations were voted by the entire membership, including branches that don’t have specific categories.)

But those preferences reflect the Academy membership of five weeks ago – maybe before “The Wolf of Wall Street” surged, before “Captain Phillips” showed its strength with the Writers Guild and American Cinema Editors, before Matthew McConaughey and Jared Leto won every conceivable Best Actor and Best Supporting Actor award.

Things could have changed since then … or voters could have known what they liked in early January, and they could still like it in mid-February.

5. Is there still time to make a move?
This is really part two of the last question. Whether or not voters have changed their mind in the past month, are they still open to doing so?

PricewaterhouseCoopers’ Rick Rosas, who oversees the Oscar vote-counting, once told me that lots of Oscar voters turn in their ballots as soon as voting opens, that a trickle of ballots come in to the accounting firm over the course of voting, and that a second flood of ballots is turned in at the last minute.

It’s that last-minute group that Oscar campaigners are now targeting – and because online voting makes it easier to get in under the deadline without worrying about mail delays, this year could see a substantial number of procrastinators.

Still, last-minute voters aren’t necessarily susceptible voters, and favorites like Cate Blanchett and Matthew McConaughey could be hanging on to comfortable leads, regardless of how some avid campaigners and excitable pundits would like to pretend otherwise.

Remember: Last year had a big gap between the nominations and the start of voting, too, with lots of time for voters to change their mind. But with a few exceptions – supporting actor Christoph Waltz, director Ang Lee – the favorites immediately after nominations were the winners six weeks later.

So those are the questions that hang in the air as voting begins. Some may be answered from the stage of the Dolby Theatre on March 2; others may never really be answered.

Go for it, voters.