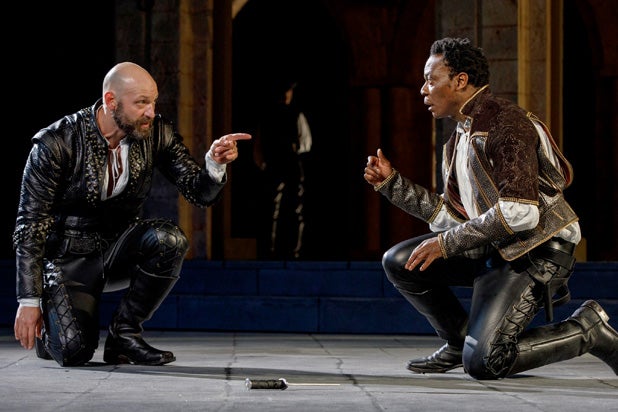 You almost have to feel sorry for Chukwudi Iwuji, the talented British actor who plays the title role in “Othello” in the Public Theater’s Shakespeare in the Park production that opened Monday.

He delivers a confident performance in an exquisite revival of the Bard’s classic tragedy, infusing the tragic Moor with both the cockiness of a war hero and the lustiness of a man who has wooed a woman seemingly above his station but whose ardor is very much at the forefront of his thoughts.

Like so many Othellos before him, though, Iwuji is ultimately upstaged by a truly brilliant performance by Corey Stoll as the duplicitous Iago. Stealing a page from his former “House of Cards” co-star Kevin Spacey, Stoll delivers a portrait of evil at its most charming and, dare I say, appealing.

Stoll also brings an admirable plain-spokenness to his lines, which are delivered with a conversational brio that makes the audience even more complicit in his murderous schemes.

But Stoll is not the only standout on stage. As Desdemona, Othello’s hard-won wife whose devotion to her husband is undermined by Iago’s plotting, Heather Lind (“Boardwalk Empire”) proves to be a surprisingly spunky heroine fit for the #MeToo era.

She is no shrinking violet, and responds with a kind of righteous anger at being falsely accused of infidelity — and even shows a spark of defiance when struck in the face. Lind also displays a real chemistry with Iwuji, which brings added poignancy to her plaintive “Willow, Willow” song late in the show as she anticipates her possible fate.

Alison Wright (“The Americans”) flashes a similar feistiness as Emilia, Desdemona’s maid and Iago’s wife, who unwittingly sets up her husband’s coup de grace. At one point, she even bites his lip to cut short an ill-timed attempt at seduction.

And Babak Tafti makes a strong impression as Michael Cassio, the young soldier who is wrongly implicated as Desdemona’s secret lover. He even manages a tricky drunk scene with loose-limbed aplomb — though some key business with rival Roderigo (Motell Foster) is staged so far upstage I feared that some audience members at the Delacorte Theater may just miss it.

Director Ruben Santiago-Hudson’s production is a revelation, galloping through three hours of drama without ever getting bogged down in exposition or stuffiness. And he’s aided by a design team — including Toni-Leslie James’ period costumes and Rachel Hauck’s simple set — that takes a similarly low-key and straight-forward approach to the material.

This is a classic tale, well told.