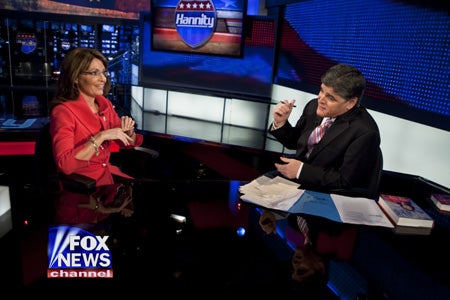 More Sarah Palin quotes, if you can stand it. (You know, pimping a book is one thing, but her ubiquitous media tour this week has gone beyond that of total saturation and into the realm of  viewer fatigue – no wonder Bill O’Reilly is annoyed this interview aired first.)

Below, some excerpts of Palin on Sean Hannity, which airs at tonight at 9 p.m. on Fox News.

On whether she thinks Fort Hood was an act of terrorism:

“I certainly do, and I think that there were massive warning flags that were missed all over the place, and I think that it was quite unfortunate that, to me, it was a fear of being politically incorrect to not — I am going to use the word — profile this guy, profile in the sense of finding out what his radical beliefs were.”

“Now, because I used the word profile, I am going to get clobbered tomorrow morning.  The liberals, their heads are just going to be spinning.  They’re going to say she is radical, she is extreme.”

“But I say profiling in the context of doing whatever we can to save innocent American lives, I’m all for it, then.”

On Obama’s position on talking to Iran’s Mahmoud Ahmadinejad:

“I do believe that [President Obama] has evolved from that position that he took as a candidate, and he realizes now you cannot make such a promise, not when you’re dealing with these mad men, who do want to destroy America and wipe like Israel off the face of the earth.”

“[T]here are other countries that we need to start putting pressure on, like Russia, and make sure that Russia is recognizing too that we’re not going to put up with those threats of this Iranian regime that is so threatening and so controlling.”

On U.S. relations with China:

“Well, we have to start cleaning up our own house here in America and not so much — well, it’s going to be twofold — but we can’t just look at China and blame them for some kind of trade imbalance.  It’s also our fault, because we had spent so much money.”

“I do not know.  I wish that I could predict and – and prepare for what’s going to happen in four years.”

“I want to help those worthy causes like special needs, making sure that our world is a more welcoming world for the most special ones. Don’t know if necessarily that means running for higher office, but you know, my life is in God’s hands, and I’m seeking that path that He would have me on.”

“They need to start by reading my book and not believing the tabloidization or the mainstream media that wants to portray me as something that I am not.”

“Read the book, my own words, and then judge me by that.  Judge me by record.  Judge me by my accomplishments as a mayor and a city manager and an oil regulator and a governor, and then if they still hate me, well, so be it.”

On the Newsweek cover controversy:

“It was just — just another little shot.”

“I think that the American people, they’re tiring of the tabloidization of some people, like me.  And they want to get to the issues.”

“I’m not out for vindication.  But I’m thinking practically, economically, in — in terms of David Letterman is that I don’t want to boost his ratings.  So, no, I have no desire to.”

On campaigning with McCain:

“And 95 percent, though, of the campaign was absolutely amazing, awesome, invigorating, energizing.”

“And unfortunately, you know, not enough pages available in a book to get to describe all of that, but about the 5 percent of the conflict is in the book.”

“As a person, I think he’s very charismatic, quite articulate.  Very, very talented as a politician”
“I’d like to see him put all of those God-given talents that he’s so full of to better use for America.”

“I will not hesitate to say that his associates have been extremely radical and we see that then in some of the appointments he has made.”

“She asked about what I read, and I read — I read Newsmax and the Frontiersman and Wall Street Journal and everything online.  I absorb the news via many, many sources.”