Paolo Sorrentino’s Big Challenge With ‘The Hand of God’: Stop Trying to Be Fellini

TheWrap magazine: ”It was clear from the beginning that this movie needed a different style – very simple,“ the Italian director says of his highly personal story

This story about Paolo Sorrentino, Filippo Scotti and “The Hand of God” first appeared in the International Issue of TheWrap’s awards magazine.

There was a time, not long ago, when if Paolo Sorrentino said that his new movie had been influenced by “Roma,” you’d know exactly what he was talking about. After all, the Italian director made sumptuous films like the Oscar-winning “The Great Beauty,” peopled with a wild assortment of characters and filmed with a freewheeling extravagance that more than earned the adjective Felliniesque.

Obviously, that would mean that his latest work takes its cues from Federico Fellini’s rambling 1972 fantasia “Roma,” right?

Wrong. “The movie that inspired me a lot when I decided to do this one was ‘Roma,’” the Italian director said, and then he clarified. “The Cuarón.”

So Sorrentino’s new film, “The Hand of God,” takes its cues from Alfonso Cuarón’s gentle 2018 black-and-white drama, in which the Mexican director brought to life memories from his own childhood. “The Hand of God,” it turns out, isn’t where Sorrentino indulges in the passion he still clearly feels for Fellini; it’s where he largely steps away from the director to explore how he became Sorrentino. 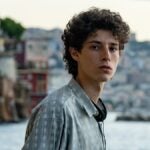 The Netflix film, Italy’s entry in the Oscars international race, follows a teenage boy, Fabietto, from a large and raucous family in Naples. Fabietto lusts after his beautiful but unstable aunt, loses his virginity to an older neighbor, worships at the altar of soccer star Diego Maradona, loses his parents tragically and wants to become a film director; at least a few of those things are true about Sorrentino himself, who had been toying with the idea of making a semi-autobiographical film for years.

“I’ve been thinking about it for about 10 years, but I just found the courage to do it over the past three years,” the rumpled 51-year-old director said through a translator when he sat down to talk, accompanied by Filippo Scotti, 21, who plays Fabietto. “It is only in the last three years that it occurred to me that a personal story like this could have significant interest.”

Asked why it took courage to look at his own life, Sorrentino initially backtracked. “Not necessarily courage,” he said. “How can I put it? What I needed to find was a belief that it was an interesting story, which is something I reached when readers of the screenplay gave me feedback.”

Still, “The Hand of God” delves into sensitive memories for Sorrentino, including the death of his parents from carbon monoxide poisoning in their home. (The teenage Sorrentino wasn’t with them at the time because he’d gone to watch his hero Maradona play a match.) “It’s quite simple: Whenever I write a scene, I feel the same emotion that the characters feel,” he said. “So I felt fine when I was writing funny scenes, and I was in pain when I was writing painful scenes.

“This happens to me when I write movies that have nothing to do with my biography. But it was more painful for this specific film.”

He cast the tousle-haired Scotti to play Fabietto, he said, because “he reminded me of myself at that age — he was shy, and he was not at ease with the rest of the world.” And with that choice, he gave a big break to a young actor who’d long been obsessed with a variety of films, including one of Sorrentino’s.

“One of the first movies I saw that my father showed me was ‘Rear Window’ by Alfred Hitchcock when I was 9, and I was very impressed by that movie,” said Scotti, who initially spoke through a translator as well. “Then when I was 13, I went to the cinema with my parents to see ‘The Great Beauty.’ I was the only boy in the cinema, and it was so strange and giant.”

The biggest challenge, he added, came not in the acting he had to do, but in the fact that he was cast in the film. “It was so difficult in the beginning to accept that the director Paolo Sorrentino decided to choose me for a role like that,” he said, shifting into English. “I had problems sleeping, because for me it was so impossible. And then it became possible.”

He spent a couple of months alone before the shoot to process what he was about to undertake, and felt more secure when he realized that he should treat Fabietto as a character, not a version of Sorrentino.

“It was strange in the beginning, but then I tried to think about this role as just a role. There were moments when I considered asking him about his life, but then I told myself that it wasn’t all that important. What was important was following a storyline that was very clear from the script.”

But that doesn’t mean he didn’t get some advice from Sorrentino. “I asked him for advice on music to listen to, and he recommended some films,” he said. “And he showed me a particular way of walking.”

Sorrentino agreed with the approach. “At the end of the day, as far as he’s concerned, it is a movie,” he said, also shifting to English for the rest of the interview. “The fact that it’s a true story is not that relevant.”

What was most relevant to the director was the style of the film, which he felt needed to stay away from the florid, lavish look and feel of films like “The Great Beauty,” “Youth” and “Loro.” “It was clear to me from the very beginning that this movie needed a different style — very simple,” he said. “The most important thing was to pull out the feelings of the characters. In order to do this, it was important to not use a complicated style.”

And Sorrentino insisted that the crucial adjustment from his more elaborate approach wasn’t particularly difficult. “It’s very easy, it’s very easy,” he said, smiling. “It was complicated the way I did it before. I found out that it was easy to do movies like this, and I regret that I didn’t do it before.”

Then again, it’s foolish to expect that the director who’s also responsible for the extravagance of the TV series “The Young Pope” and “The New Pope” will ever really abandon his affection for glorious excess. In fact, even in a movie that’s inspired by a different director’s “Roma,” Fellini gets a couple of shout-outs — one in a scene in which Fabietto’s brother auditions to be an extra on a Fellini movie, and another when a character in the film quotes the master as saying, “Cinema’s not good for anything—it’s just a distraction.”

And does Sorrentino believe that? “Yes, absolutely,” he said. “Cinema I a distraction.” He smiled. “Also, I agree because I am not sure if that quote belongs to Fellini or to me. I don’t remember. I overlap my ideas with the things that I have read about Fellini, and I agree completely.”

Read more from the International issue of TheWrap magazine here.