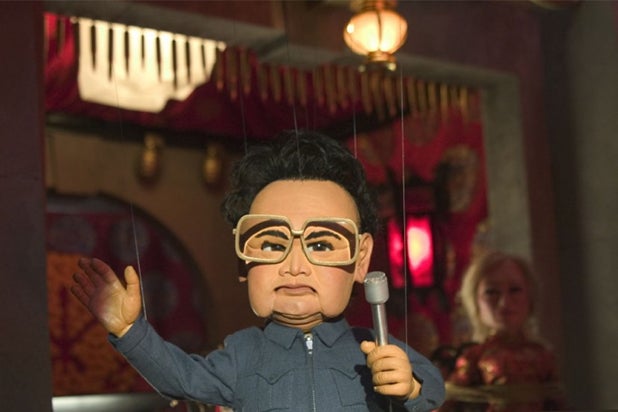 While indie theater chain Alamo Drafthouse planned to show Trey Parker and Matt Stone‘s 2004 puppet satire in place of Sony’s yanked “The Interview,” screenings of the cult classic have now been canceled.

“Due to circumstances beyond our control, the TEAM AMERICA 12/27 screening has been cancelled. We apologize & will provide refunds today,” Alamo Drafthouse’s theater in Dallas tweeted Thursday.

Additional cancellations of the North Korean-themed comedy were then revealed in other cities, including Atlanta. “Team America World Police pulled from all theatres as per Paramount Pictures,” tweeted the Plaza Atlanta.

As TheWrap previously reported, Alamo Drafthouse planned to screen “Team America” in place of “The Interview” as a Plan B.

The comedy from “South Park” creators Trey Parker and Matt Stone, sends marionettes to battle terrorists, including Kim Jong-un’s father, the late Kim Jong-il. At the end of the movie, Kim Jong-il is kicked off a balcony and impaled on a spiked helmet. But it turns, out he is actually an alien cockroach. Kim Jong-il escapes then, vowing to return.

Paramount Pictures had no comment when contacted by TheWrap. But it should be noted, “Team America” is available on Amazon and Netflix for those who really want to see it.

Security is a likely motivation behind the 2004 movie’s return to theaters, following 9/11-style threats made against screenings of the Seth Rogen-James Franco comedy, “The Interview.”

The “Team America” announcements came just one day after Sony decided to pull “The Interview” from its scheduled Christmas Day release following threats from hackers.

“In light of the decision by the majority of our exhibitors not to show the film ‘The Interview,’ we have decided not to move forward with the planned December 25 theatrical release,” the studio said in a statement to TheWrap on Wednesday. “We respect and understand our partners’ decision and, of course, completely share their paramount interest in the safety of employees and theater-goers.”