Paris Hilton has emerged as one of Britney Spears’ staunchest defenders.

On Monday’s episode of her “This Is Paris” podcast, Hilton addressed Spears’ remarks during her conservatorship hearing in which she referenced the heiress, saying, “The Paris Hilton story on what they did to her at that school. I didn’t believe any of that either — I’m sorry. I’m an outsider.”

“And maybe I’m wrong, and that’s why I didn’t want to say any of this to anybody to the public,” Spears continued. “People would make fun of me or laugh at me and say, ‘She’s lying, she’s got everything, she’s Britney Spears.’ “

Hilton said that she didn’t believe the pop star’s words were an affront to her.

Hilton expressed sympathy over Spears’ battle with her conservatorship, calling her “amazing” and an “icon.”

“Dealing with it as a teenager was hard but I can’t imagine, still, as an adult, after working your entire life,” she said. “She’s built a huge empire; she’s a legend, she’s an icon, she’s a mother. She’s amazing and she has these people controlling her money, her life.”

Hilton first came out in support of the singer on a February episode of her podcast that aired shortly after the documentary “The New York Times Presents: Framing Britney Spears” was released. 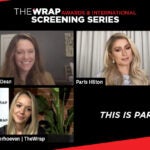 Also Read:
How ‘This Is Paris’ Helped Paris Hilton Stop Her Nightmares Inflicted by Past Trauma (Video)

“I haven’t spoken to her in a few months. I haven’t even watched the film yet, because I’ve been so busy,” Hilton said then. “But I heard it’s just a really sad movie. It makes me really feel for her, because she’s such a sweet girl and has such a big heart and I just can’t imagine being controlled like that. You know, when you’re an adult and you’ve worked your whole life for building this empire and then just to be treated like a child, it’s just not fair.”

She also admitted that the film influenced her consider the microscope both she and Spears have been placed under by the press, both together and apart.

“I’ve been reading all of these articles coming out where they were just saying, like, Britney, Paris and just like, a group of us were just were treated so unfairly and just like, this really misogynistic view and just being very cruel and mean and making fun of us,” Hilton said. “It made me think a lot this week, reading all these new things that are coming out after the Britney film.”

Following her most recent podcast episode, Hilton posted a clip of the episode on Instagram with the caption, “I will always support and love Britney. She is so kind and sweet, and she deserves her freedom. I’ve been saying #FreeBritney for a long time, and I will keep saying it until she is free.”