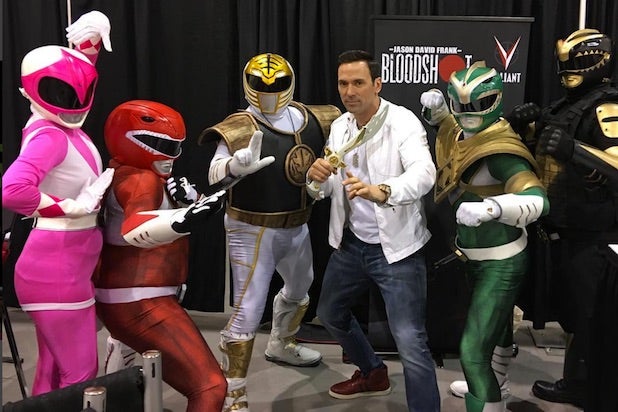 A man carrying weapons and insisting he was the real-life embodiment of Marvel’s vigilante The Punisher was arrested at Phoenix Comicon Thursday after he told authorities he was targeting “bad police officers,” according to The Phoenix New Times.

According to court documents, it was later discovered that the man, 31-year-old Matthew Sterling, had set his sights on “Mighty Morphin Power Rangers” star Jason David Frank, who played the Green Ranger in the original TV series and was attending the Arizona fan event. Police said they later found a notation on Sterling’s calendar the day he was at Comicon that simply read “Kill JDF.”

Sterling was in possession of four firearms and “several knives” at Comicon at the time of his arrest, according to USA Today.

Also Read: Everyone Is Freaking Out About Comic-Con 2017 Returning Registration Badges

The Phoenix New Times reported that Sterling was charged with attempted murder, resisting arrest, aggravated assault, carrying a weapon in a prohibited place and wearing body armor during the commission of a felony. His bail was set at $1 million.

Sterling told police that although he was aware his real guns and other weapons were not allowed inside the event, the rules didn’t apply to him because he was “The Punisher,” the Marvel Comics antihero who stoops to murder, kidnap, torture and other acts of violence in his war against crime.

“Due to the pending allegations, I will only state I do not know the person who was arrested, but I will pray for him,” Frank said at a press conference. “This incident is an eye-opening situation to increase and add more security to all Comic-Cons around the world.”

For the duration of the show, all prop weapons were banned from the remained Phoenix event.

Frank later posted a video message on Facebook, saying in part, “Even though it looks like things don’t faze me, I refuse to have a situation tear me apart mentally. You gotta remember, things could always be worse. Things could’ve been worse. But it wasn’t. You know, everyone is safe, things are okay, and it’s a great thing.”