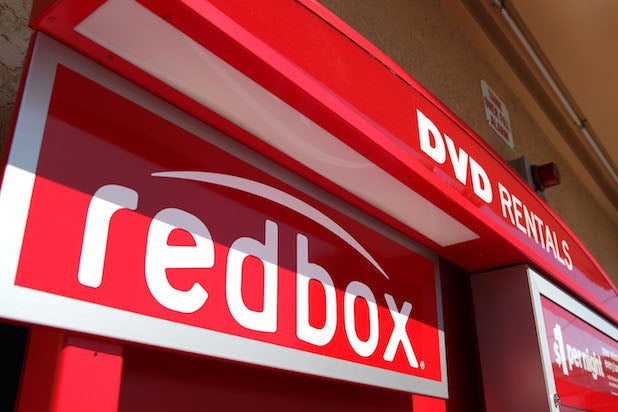 Redbox owner Outerwall Inc. has agreed to be bought by private equity firm Apollo Global Management. The deal is valued at about $1.6 billion.

The private company will acquire all outstanding shares of the formerly public one to the tune of $52 apiece, all in cash — that’s approximately a 51 percent premium over OUTR’s March 14 stock price. The market is responding to the announcement favorably; Outerwall shares are currently up about 12 percent, or between $5-$6 apiece.

Here’s a snapshot of the stock’s five-day trading, so readers can best visualize the early Monday morning spike: 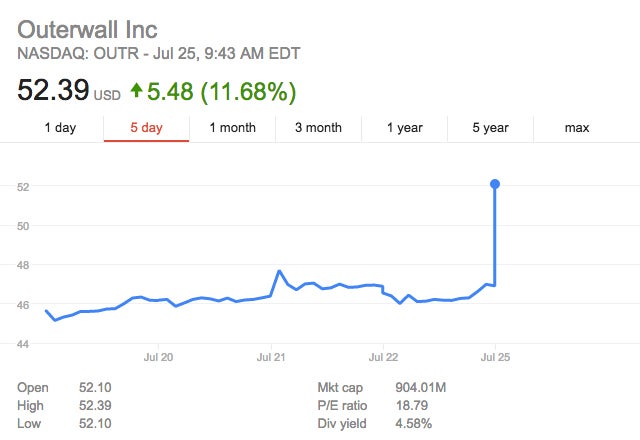 The transaction requires that shares representing more than half of OUTR be tendered, plus the standard receipt of certain regulatory approvals and other customary closing conditions.

This deal is currently expected to close during the third quarter of 2016. When it’s all said and done, Outerwall will become a privately held company and its  shares will no longer be listed on any public market.

Before that happens, however, the Outerwall Board of Directors will pay a 60-cent quarterly dividend per share of stock, the company said Sunday. It is expected to be paid on Sep. 6 to stockholders of record at the close of business on Aug. 23.

“Outerwall’s Board of Directors has undertaken a comprehensive review of a wide range of strategic and financial alternatives to maximize value for all Outerwall shareholders,” said Erik E. Prusch, Outerwall’s CEO. “We are pleased to reach this agreement, which follows a robust process and provides an immediate and substantial cash premium to our shareholders.”

“Apollo is an ideal partner to support Outerwall’s efforts to continue serving our millions of loyal customers and dedicated retail partners through our unrivaled network of kiosks and automated retail offerings,” he continued. “We look forward to working closely with Apollo as we continue to strengthen our businesses and execute on our strategic plan.”

“We are extremely excited for our funds to acquire Outerwall,” added David Sambur, partner at Apollo. “Outerwall is a dynamic customer-focused business that delivers superior kiosk experiences that delight consumers and generate value for its retailer partners. We look forward to working with Outerwall’s talented and dedicated team to continue the business’s strong heritage of growth and innovation.”

Outerwall plans to release its second quarter earnings after market close on Thursday, but does not intend to hold a conference call to discuss earnings.