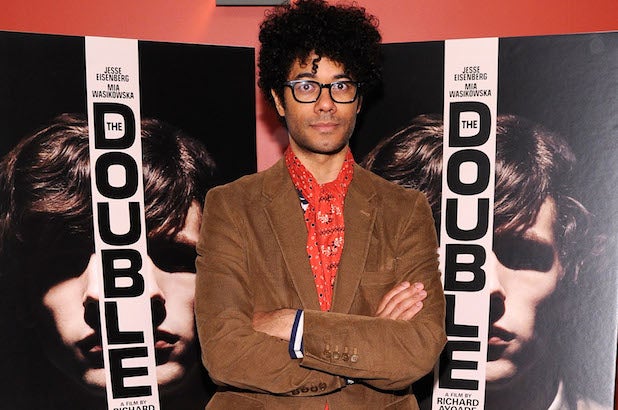 Richard Ayoade, director of “The Double,” is incredibly soft-spoken. Of course, reticent filmmakers are not a rare breed, but his humble whispers qualify as a surprise given the strength of his comedic voice.

He was president of the famed Footlights comedy group at Cambridge in the late ’90s, where he worked alongside the likes of John Oliver (his vice president) and David Mitchell (of “Peep Show” fame). With classmate Matthew Holness, he created the character Garth Marenghi, an insufferable and remarkably untalented horror writer who nonetheless was a best-selling author. The character ultimately got its own TV series, “Garth Marenghi’s Darkplace,” a purposely awkward and hilariously painful send-up of 1980s medical dramas with action movie cliches. It only lasted one season (and a subsequent spinoff), but has become a cult classic.

The series also helped Ayoade, who played a hospital administrator/TV producer in the show, score the role for which he is most famous: Moss, the geeky tech wiz opposite Chris O’Dowd in Graham Linehan’s comedy “The IT Crowd.”

While working on that show, Ayoade began collaborating with Avi Korine (brother of “Spring Breakers” director Harmony Korine) on a semi-modernized screenplay adaptation of Dostoyevsky’s novella “The Double.” They put it on the back burner while Ayoade made his directorial debut on the critically acclaimed coming-of-age film “Submarine,” which helped “The Double” pick up steam, cast members and financing.

Ayoade’s version of “The Double” is set in a punishing bureaucratic nightmare world, where the gears of capitalism grind the sad occupants of Soviet-like utilitarian buildings. It was in fact shot in an old, crumbling business estate outside of London, the sort of place that went up after World War II and serviced many people, few of them happy.

But the movie, which stars Jesse Eisenberg, has a perverse comedy to it. Eisenberg plays a sad and timid man named Simon who one day meets a man who looks exactly like him — only he’s the only one that realizes that this guy, who is far more outgoing and charming, is his doppelgänger. This version of Simon — also played by Eisenberg — rises quickly in their company and romances Simon’s crush, played by Mia Wasikowska (old Ayoade friend O’Dowd also has a role here). As you might imagine, this causes madness on many different levels.

Also read: Nick Frost on Dancing, Tearing His Neck While Carrying Chris O’Dowd, and His ‘No Jerks Allowed’ Rule

Ayoade sat down with TheWrap last week to discuss his film and career.

TheWrap: The movie is much funnier than it should be, by the look of it or subject matter. How do you sneak in humor?
Richard Ayoade: I think the idea of it is funny, just saying, “Do you notice any similarities between us in that way?” “No …” That always struck me as funny, and I think Dostoyevsky always meant it as funny, and it’s funny that (Eisenberg) gets it into that kind of rage, the kind of impotent person battling against the world, which I think Larry David and Louis C.K. do. “Notes From Underground” could be a “Curb Your Enthusiasm” episode in a way. This awful dinner date, this awful dinner with his friends where he gets humiliated, and this other thing where he becomes obsessed with someone who bumps into him and he wants to bump back into him, this is like a “Seinfeld” episode. So I think it’s inherent in there, and black situations are often funny to me.

How did you do the actual double work with Eisenberg?
We didn’t do face replacement. It was either old-fashioned split screen or motion control, which I guess has been around since the ’80s or maybe even late ’70s. He does one character and then you pick a take and then he performs the other character with an earpiece, so you never see the scene until afterwards. It’s hard to do technically, because it’s almost like recording the second track of music, you have to lock in precisely the timing — both verbally because we wanted the characters to overlap, which is hard to do, and then also them looking at one another the right way.

It sounds like an impossible way to act.
It’s everything you wouldn’t want. He managed to be technically precise but still have the spontaneity you need. But Jesse is great. He’s very funny, and I think in some ways, it’s unusual for an actor to be as intelligent for Jesse, so that can come across as, I don’t know … in a way, part of what you come to expect from actors is utter transparency, that you can just witness them and somehow you’re in a funny way above them, you can see through them but they don’t know what your’e thinking. Whereas Jesse isn’t transparent in an interview that way, he’s not a complete open book, but you know, I think that’s good, it means that he isn’t at the mercy of others.

So how do you direct or know you have the take if you don’t know what the scene will look like until after?
You don’t exactly see it, but you have a pretty good idea of it. You rehearse with an acting double. What you don’t have is that sense of seeing the scene and making adjustments, in that way you often do, where you say let’s do a run through and see how it is.

So in post, were there a lot of times where you didn’t have what you needed?
It was fine. There was this one scene in the film where the two of them were walking down this very long corridor and … it looked like it was all out of sync. That would have been bad, because there’s no options, there’s no coverage. But it was just an error in the way it loaded in.

This movie feels timeless, in that it’s hard to tell when it’s set — aside from the fact that it doesn’t feel like today’s world.
I guess inherent to this novella, it feels predigital to me. It needed to exist in a world where work was important and inescapable and where people didn’t have options. I guess the idea of modern life is these infinite possibilities that are open to you — maybe they aren’t really, but there’s the appearance of fluidity. This needed to have a very strongly stratified society, but we didn’t want to make it specifically a period piece where we said this is about the ’50s or ’60s or whatever it would be. We really wanted to make it an alternate world, but I guess we don’t set it up or say, “In a galaxy far, far away”; we just hope people accept it, like in a Greek painting: You know it’s not a real world, it’s just a response to it, not the real thing.

If he has a cell phone or Facebook or the internet, he can escape.
Yeah, what happens in this world has to be everything.

It looked like an old Soviet city, but he’s being crushed by capitalism in a way, with the grind of his job.
I guess, you know, that brutalist architecture, there’s a lot of it in Berlin, and Germany is a capitalist country. And even places like Scandinavia have a strong socialist side, but they are extremely successful economically and have a capitalist underpinning as well. We wanted it to have a functionalism to it, which is one of the functions of Eastern Bloc architecture.

You couldn’t have it in New York. He wouldn’t be crushed.
There’s too much life, and too much information. We didn’t want to do a contemporary story.

When was “Submarine” set? The ’80s?
That was supposed to be in a nonspecific time, but nonspecific always seems older. Partially because there’s kind of a nostalgic element to that [film]. I always say “The 400 Blows” feels more like postwar Paris than 1959 even though it’s not a period piece, and “The Graduate” feels more early ’60s than 1967. I think there’s an inherent nostalgia to coming-of-age stories, that they’re always in the past.

Because we see ourselves in them.
Yeah, and I can’t imagine what it’d be like to be 14 now.

It’s interesting to see the difference in the sort of projects you act in versus direct. Do you have different goals in each?
I don’t really feel I’m an actor at all. Things that I’ve been involved in the writing of, say Garth Marenghi, that feels different, that’s fine, and I’ve done things where I didn’t write, and there I just feel that I try to do what the director wants, ultimately. You have ideas of what you want to do, but ultimately it’s their call. I haven’t really ever had an acting agent, I’ve not pursued it in that kind of a way. I was just fortunate that Graham Linehan wrote “The IT Crowd” — he said he had me in mind for it, but I don’t think if it had been a casting call, I wouldn’t have gone up for it. I just don’t view myself like that. And similarly with “The Watch,” I didn’t like go up for it in that kind of a way; it’s more like he said, “Can you do a tape?” So I haven’t tried.

Shouldn’t that be a sign that everyone wants you to act?
No, just that two people want me to. I guess that was the last thing I have done, outside “The IT Crowd,” everything else was just in friends’ things. It’s nice being able to have [“Mighty Boosh” creators] Noel [Fielding] and Julian [Barrat], because I know them, that’s just a fun thing to do. But I don’t know if I could do a play or something.

You were studying law and then made the decision to leave that and do these things, so you at least had to have confidence in your creative side.
I suppose. At university I started doing shows and things with John Oliver, and then we got agents before we left university, so it felt like there was an element of legitimacy for us trying it for a bit. And then yeah, I started working on this character Garth Marenghi. I just kind of started doing it, and in a way, you’re quite short-sighted at that stage, in that you just want to get this thing on, or you just want to do this show … you can’t think further about what you want to do.

I kept thinking that maybe “the double” in this movie doesn’t really look like him, he’s just convinced of it.
Well there’s a Nabokov story like that, “Despair,” where someone is convinced that they have this exact doppelgänger but it ends up not being like him. The whole film is from his point of view, so you only have his consciousness to trust, really.

Either he’s the only rational one, and we’re seeing it from his point of view, or we’re inside the mind of a crazy person.
But that doesn’t exclude the possibility that other people are crazy. You just have to decide what the level of accuracy is. But in a way, if someone tells you a joke, I never feel the impulse to go, OK, fine, but what actually happened? The purpose of it was this. I like subjective things. I don’t go, What really happened with Holden Caulfield’s schooling? I’m happy to have his perspective on it and have it be the experience.