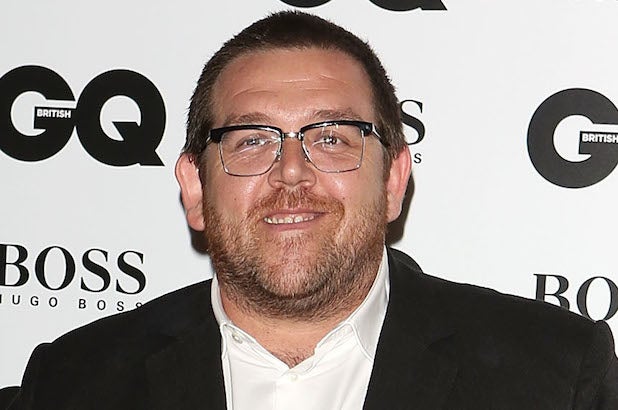 Nick Frost: Big, lovable, impeccable at being a goofball.

Oh, and he’s a pretty good dancer, too.

You may not think so at first glance, but Frost proves fast and graceful on his feet in his first solo movie star role, “Cuban Fury.” The little indie, which had a limited debut last week, features the 42-year-old British actor, who is best known for his work with Simon Pegg and Edgar Wright in “Spaced” and the Cornetto Trilogy, as a former salsa dancing champion who long ago gave up his love of the sport after getting beaten up outside a competition.

Giving up the thing he loves most means that he grows into a miserable middle-aged man with no prospects… until he finds out that his new office crush (played by Rashida Jones) is secretly passionate about the form. Naturally, he decides to dust off the platform shoes and win her over with his moves. Only his frenemy co-worker (Chris O’Dowd, now co-starring in “Of Mice and Men” with James Franco on Broadway) stands in his way.

It’s a classic underdog story that Frost first came up with four years ago, though it took him a while to work up the guts to suggest it to his producer, Nira Park. Frost talked with TheWrap about the unlikely project, and the dangers of dance fighting with O’Dowd.

TheWrap: This movie feels like an old-school comedy, which we don’t see much of these days.
I think some people have oddly treated it with suspicion, because they’re not sure that it can just actually be that nice. I think we’re in a position now that, unless a big fucking robot throws a building at a planetoid, people aren’t convinced about it. It’s all right that a film is just nice. That’s OK.

Even comedies are dark and cynical now.
Yes, or they’re very serious. They take themselves a bit seriously. And that’s fine, that’s not not valid, there’s nothing that isn’t valid, but I think we set out just to make a beautiful, funny, underdog story. I think if you dug a bit deeper, there are things in there that are not as light and friendly in terms of the bullying and having the courage to get out of bed and do something you don’t feel comfortable doing.

So the story goes that you got drunk one night and sent an email to your producer, Nira Park, with this idea. What made you think of it in the first place?
Well the drunk email was me essentially being caught, catching myself and knowing that, I would never … I got an idea about four years ago about a man who was a great dancer and he got a girl fall in love with him because he could dance. She was a dancer and had a boyfriend who was a dickhead and didn’t dance, she was unhappy, and he won her over. That was my original story.

What made you send it out to her, finally?
That was my idea and I sat on it for ages, because I fucking hated it and I was afraid of that idea, because I thought, that’s actually quite a good idea. And I knew that if I was to tell someone, it would then be out of my hands and I might then have to do it. And I was frightened of that concept, and it was only coming in from a party one night, drunk, that gave me the courage to just write the pitch and email it to Nira. And then I woke up, with a kind of dry mouth in the morning, Thinking ugh, what did I send her? And I saw the idea I had, and there was even a message from Nira saying, “Hey, this is a great idea, let’s do it.” I was like, fuck, now I’m in trouble. But I think I always wanted to get caught.

You play a very different role here than the ones you’ve played with Simon and Edgar; was it a conscious choice to spread your wings, so to speak?
I think that was a very conscious decision, in terms of it’s important not to get stereotyped. I think that was part of my process in terms of the creation of that. I needed to do something that was so different, and a dance film was it. Sometimes when we were training for this, I’d nip outside to have a cigarette at lunchtime and I’d be having a pull and I’d hear someone say, “Oh, hello!” And I’d turn around it was a fan, a guy or a girl or two women and they’d look at my dance outfit and they’d say, “What are you doing here?”

I danced in a place called Pineapple, which is a really old, famous dance studio in London. And I’d say, “Oh, I’m doing a film where I play a dancer,” and everyone literally went, “Haha, brilliant, I’ll see you later.” And that was a good thing to me, that you would find even the concept of that funny enough to laugh at me. And I thought, alright, that’s probably a pretty good thing, we’re in a good place.

And in the movie, you were actually good at dancing, it wasn’t a pratfall comedy.
We weren’t making a comedy about salsa. It had to be good, he had to be able to be good enough to win this girl over. The thing about “Balls of Fury,” and I really liked “Balls of Fury,” it’s not really about table tennis, or “Dodgeball,” they’re good and funny films, but they’re not pro-dodgeball or table tennis. I think this is a dance film, a film without dancing in it that’s about love and about friendship and not giving up, or realizing that you still have a life at 40.

Did you continue salsa dancing after the film?
I haven’t done to clubs because I’ve just done thing after thing after thing. I have a child and my wife doesn’t salsa dance, so it kind of feels remiss of me to say, as a father, to say to my wife, “I’m gonna go dancing tonight, potentially with a 25-year-old Cuban firecracker. See you in the morning for some more shit nappy changes.” But I dance a lot at home and I dance a lot of salsa a lot at home, too.

Did you suffer any injuries on set? Training and dancing must have been intense.
The only injury I got was when me and Chris O’Dowd did the dance fight and I lifted him up — that always gets a gigantic laugh — but when I did that I kind of tore the muscles in my neck. I was meant to do the flips in the car, as well, and I trained on wires to do them, but we were shooting that after the lift, so as soon as I did that, I had to go home for the day. It was one of those things where, no, you can’t do any more work today. So they had to shoot those things with a heavily padded stuntman.

You just got cast in a pilot with Justin Long for Fox.
We’ll see how that goes, because I have no expectations about that at all.

It will certainly be be very different than British TV, at least.
A British show is six episodes and then it’s done, that’s it. You’ll either be recommissioned for six episodes, which takes three months, or not. That’s all.

So are you ready for the grind of an American sitcom?
No, not at all. But you just have to adapt. What’s the alternative? Just crumble into a pile in the cupboard and shit your pants?

Confession: Sometimes I’d like to do that.
Well that’s fine, you can do that, but then you’ve got to get out of that cupboard, wipe yourself off, and get out amongst it all… I just want to keep continue making good things with nice people, I didn’t really start doing this job ’til I was 30, and I think I’ve been very fortunate. I’ve worked with hundreds of people and I’ve never met a bad one. There’s a No Jerks Allowed rule in my life, in that forum.