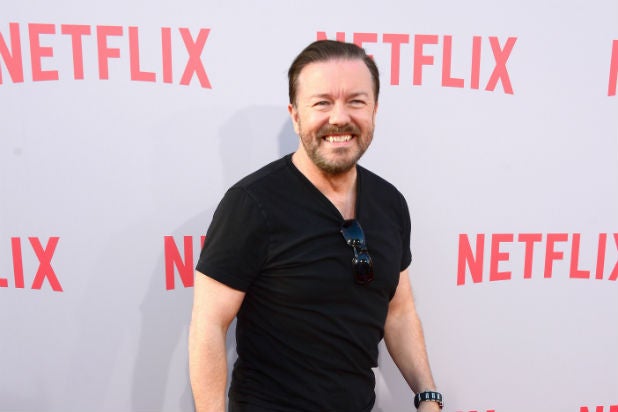 In the shadow of beloved Tina Fey and Amy Poehler, NBC is once again tapping Ricky Gervais to host the Golden Globe Awards.

The acidic British comedy star will play emcee for the three-hour ceremony, which broadcasts live on Jan. 10 from the Beverly Hilton Hotel.

“We’re excited to have Ricky Gervais back to host the most enjoyable awards show of the season in his own inimitable way,” NBC Entertainment Chairman Robert Greenblatt said in a statement on Monday. “Disarming and surprising, Ricky is ready to honor — and send up — the best work of the year in film and television. Fasten your seats belts.”

“Ricky Gervais left us with a lasting impression and we are thrilled to have him back in our show as we honor the best in film and television,” added Hollywood Foreign Press Association president Lorenzo Soria. “His off-the-cuff wit and quirky charm will surely have the room and audiences around the world at the edge of their seats.”

Gervais hosted for three straight years, from 2010-12, then yielded the podium for the last three Globes ceremonies to Tina Fey and Amy Poehler.