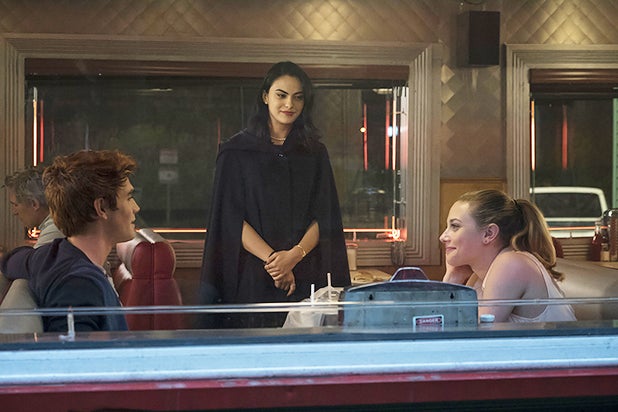 The Archie-Betty-Veronica love triangle will continue to live on in The CW’s new take on the classic comic book characters, according to “Riverdale” showrunner Roberto Aguirre-Sacasa.

However, don’t expect to see two girls fighting over some dude as the overwhelming storyline, even though it was the linchpin of the comic books for 75 years.

“It was much more important for me to have Betty [Lili Reinhart] and Veronica [Camila Mendes] be real friends, not bitchy frenemies,” Aguirre-Sacasa told TheWrap. “The truth is, Archie [KJ Apa], Betty and Veronica will all have romantic storylines that don’t lock us into the love triangle — not at all during Season 1, at least.”

The love triangle will, however, be a factor on “Riverdale” in some way shape or form.

“There’s a reason the comic books have been around for 75 years,” said the show runner. “There’s a reason why even shows that aren’t ‘Riverdale’ have love triangles. That will always be a little bit a part of it, but it’s not my bag. I don’t want Betty and Veronica to be fighting over Archie. The comic book has done that, there are fresher ways to tell that story.”

Part of that means fans shouldn’t be looking to the comic books to guess the outcome of who will end up with Archie — if either of them do.

“In the series finale, we’ll finally answer the question,” Aguirre-Sacasa teased. “If Betty and Veronica even care about Archie at that point — they will as friends, but they’re not waiting around for him to make his decision.”

“Riverdale” premieres Thursday at 9 p.m. ET on The CW.