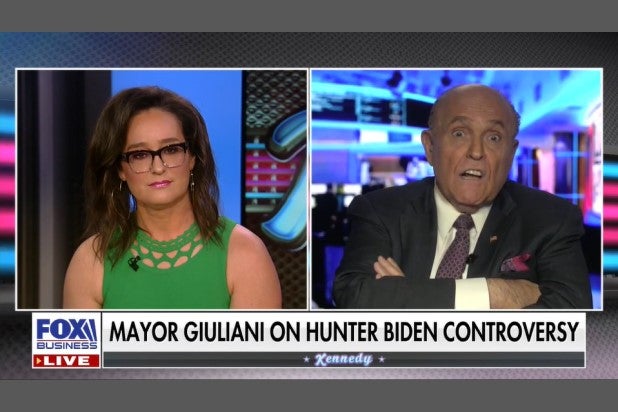 An interview between Lisa “Kennedy” Montgomery and former New York City mayor Rudy Giuliani went off the rails Tuesday night, with Giuliani losing his temper after the Fox Business host questioned his accusations against Joe Biden’s family and brought up his now-infamous scene from the “Borat” sequel.

Kennedy — who offended the attorney by likening his crusade against the Bidens to dossier author Christopher Steele — steered Giuliani toward the “Borat” scene in which Giuliani is unknowingly duped into an interview with an actress pretending to be a 15-year-old. At one point, the actress invites Giuliani into a hotel room bedroom and he pats her waist, instructs her to give him her phone number and is seen with his hand in his pants, which he’s explained by saying he was tucking in his shirt.

He repeated explanation Tuesday after Kennedy asked if he regretted the interaction caught on film.

“No, it’s not stupid at all. I have a 15-year-old daughter. I watched that and I was kind of grossed out by it!” she shot back.

The two continued to argue back and forth about “Borat” and the family of the Democratic presidential nominee. Kennedy repeatedly refused to engage Giuliani on Biden-related topics Fox News hadn’t verified.

“You can’t tell me you haven’t loved this conversation. You loved it,” she said, trying to end the interview.

“I have not loved this conversation!” said Giuliani, who continued to rage against Kennedy, Steele and the media. Kennedy interjected a “yep” and “very good” here and there before cutting it him off mid-word.