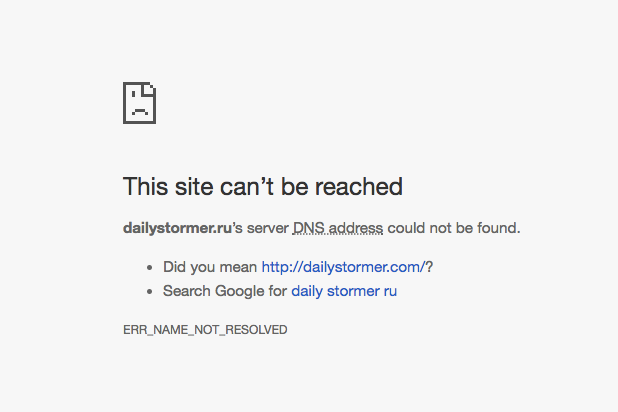 The Daily Stormer — the infamous neo-Nazi website — turned to a Russian domain after it was dropped by both its web hosts, GoDaddy and Google, for violating its terms of services earlier this week. Now, Russia is giving the white supremacists the boot as well.

Alexander Zharov, the head of Roskomnadzor — the Russian federal body in charge of communications — said in a statement the agency had told Russian domain hosts to stop supporting the site.

“The Russian legislation establishes an extremely strict regime to counteract any manifestations of extremism on the Internet,” said Zharov. “The Daily Stormer promotes a neo-Nazi ideology, incites racial, national, and other forms of social discord.”

Whereas it was a moral argument from the American companies that refused to host Daily Stormer, in Russia it’s a legal issue. The Russian government is notoriously uncompromising with its censorship, and it has several measures aimed against Nazi rhetoric.

In 2014, the government added fines of up to 300,000 rubles (about $5,000) and five years in prison for those convicted of “rehabilitation of Nazism.” The law adds an additional 200,000 rubles and a ban of up to three years for those that use a public office or media outlet to promote Nazi ideology.

After moving to its Russian domain on Wednesday, Daily Stormer founder Andrew Anglin boasted the site was back in a blog post titled, “A Tale of True Friendship: Trump Called Putin to Get Us a New Domain!” “The Stormers rushed out of their cave into their new lovely, lovely home at DailyStormer.ru,” said Anglin.

But the site’s “new lovely, lovely home” quickly went offline just hours later. In an email to TheWrap on Thursday, Anglin said Daily Stormer will move back to the dark web, where it had been running for a brief period after its ousting from Google.