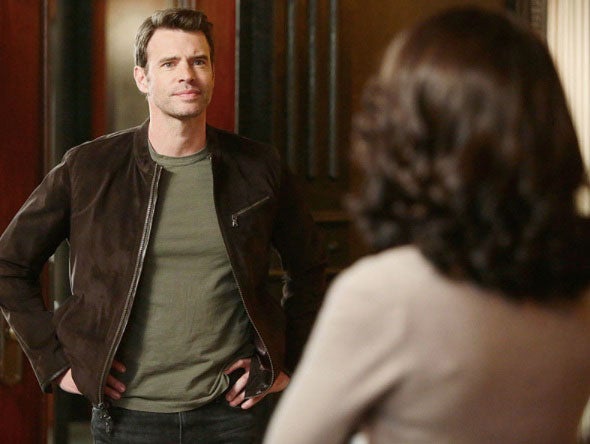 (Spoiler alert: Please do not read on if you haven’t watched Thursday’s episode of “Scandal.”)

“Scandal” is known for its twists and turns, but Thursday night’s episode shocked even the most hardened fan.

The episode titled “White Hat, Red Shirt” should have been a teaser that one character would end up covered in blood. The unfortunate victim was Jake (Scott Foley), who sadly looks unlikely to survive.

Who perpetrated the killing was even more of a surprise, as Olivia Pope’s (Kerry Washington) new lover, Franklin Russell (Brian White) — whom many assumed was a hapless victim himself when he was trussed up by her father, Rowan Pope — was the one wielding the knife.

Also Read: ‘Scandal’ Sneak Peek: Taking Down Daddy Could Be the End For ‘Olitz’ (Video)

Olivia asked her father after his surprise return for there not to be any casualties in their war, but he clearly didn’t adhere to her request.

When Jake later enters Pope & Associates’ empty offices and is attacked by a man with knife, he pulls off the mask to reveal Russell, who was working for Rowan all along.

While it was unclear whether Jake’s stab wounds were fatal, Foley’s tweet after the episode aired on the East Coast doesn’t bode well for his character.

So, there it is. Thank you Twitter for tonight and all of the Thursday nights. It's such an honor. #Scandal

Holy #Scandal! I need a drink too, but not to grieve 😀 https://t.co/uvwk5fbbp3

I'm sorry I know he's evil and all that but I love me some #PoppaPope. @JOEtheMORTON is fantastic!! #Scandal 5 Min! pic.twitter.com/iRLr44DBeV

I know she's devastated and everything – but that was a fantastic coat!! @kerrywashington is that @RalphLauren? #Scandal

"My life is very complicated." Understatement of the century. @kerrywashington #Scandal

LAWDDDDD THE USHER BOARD GOTTA COME TOGETHER AND PLAN JAKE'S FUNE!!! I KNEW THIS DAY WAS COMING! #Scandal