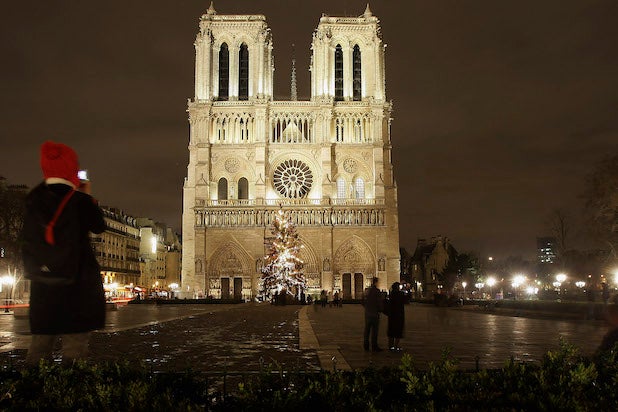 PARIS - DECEMBER 04: An unidentified tourist takes a picture of a Christmas tree in front of the Notre-Dame de Paris Cathedral on December 4, 2007 in Paris, France. (Photo by Pascal Le Segretain/Getty Images)

Science Channel has ordered a new series that explores whether some of the world’s most iconic architectural feats could have been built today using modern technology. “If We Built It Today” takes a closer look at The Great Pyramid of Giza, Rome’s Colosseum, the Great Wall of China, and the Notre Dame Cathedral in Paris to see if they could be recreated using modern innovations — or if their structural secrets have been lost to time.

The eight episode brings architects, historians, engineers, and builders all over the world to find the answers.

To film the finale, the crew became the first to get access to Notre Dame Cathedral since it caught fire in April. Other structures featured in the series include Noah’s Ark, the Brooklyn Bridge, the Pantheon, Roman Aqueducts.

According to Science Channel, “The series premiere travels to Cairo explore the Great Pyramid of Giza, which is more than 40 stories high and the width of 10 football fields. The 200 levels of stone weigh more than six million tons, with each individual block the size of an SUV. Nothing in the world compares to it. The city of Memphis, Tennessee tried to recreate its own Pyramid in 1991, but immediately had issues with flooding and closed its doors in 2004. Clever engineers eventually embraced its watery past and reopened the building in 2015, featuring an aquarium on its bottom floor.”