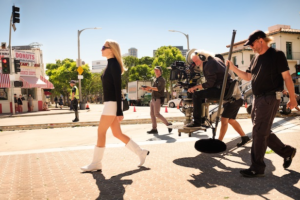 How ‘Once Upon a Time… in Hollywood’ Turned Back the Clock on L.A.’s Streets

Screenwriting Assignments Are on the Wane, but Here’s How to Break Into the Game (Guest Blog)

The Rep Sheet: ”It’s really about launching your client with a great piece of material and socializing them in the right way,“ MGMT’s Michael Diamond says

A big chunk of a screenwriter’s income often comes from assignments (which of course means their agent or manager’s income as well). Agents and managers use a grid to track open writing assignments at studios and production companies.

Since the 2007-08 screenwriters strike, the number of assignments has contracted significantly, MGMT Entertainment’s Michael Diamond explained. “When I was an assistant at UTA, there were hundreds and hundreds of assignments. And you could just go through those grids and position your clients for them.”

Circle of Confusion’s Zach Cox said: “(It’s) more challenging in that the studios make less movies now than when I got into the business in the mid-2000s.” Thus, there are fewer open writing assignments. “The studios have decided to take bigger bets on bigger movies that they can make billions in return.”

“They are certainly not developing as much as they were pre-writers strike,” Jake Wagner from Good Fear said. “The studio financiers only focus on developing on movies they intend to make. Back in the day, they would just develop volume and see what scripts came in strong.”

Also Read: Why Top Agents and Managers Are Steering Clients to TV: 'That's Where the Money Is' (Guest Blog)

So where does that leave writers and reps? Here’s some advice from some top agents and managers in the field.

Wagner said two categories of writer get most of the assignments. “One is the tried-and-true veterans who are expensive but deliver,” he said, citing blockbuster-writers like David Koepp (“Jurassic Park,” “Mission: Impossible”) and Billy Ray (“The Hunger Games” and “Gemini Man”).

“But then a lot of assignments go to the young, new writer. Maybe they got a script on the Black List but it didn’t sell. But they’re on the Black List. They can get assignments because they have very low quotes so they’re inexpensive, and they’re hungry, so they’ll obviously work very hard,” he explained. “A lot of studios might say, ‘Let’s take a shot on the newbie.'”

“I do wish there were more opportunities given to young, exciting writers, but I feel execs, especially ones who don’t have a very proven track record, are scared to go out on a limb out of fear they may lose their jobs if they make a mistake,” APA feature lit agent Adam Perry said. He noted that it’s often a safer bet to spend X amount on a big name like Terry Rossio (“Pirates of the Caribbean”) than to roll the dice on a less expensive newbie, because no one would blame the exec if the script didn’t live up to expectations. “By the way, Terry is a great writer and that’s why I’m using him as the example,” Perry said. “Whereas if you hire X beginner and they don’t get the job done, even though it’s cheaper, it could still very well be your ass for going out on a limb and ultimately wasting the studio’s time.”

That means fewer assignments for writers who make, say, $250,000 to $750,000 per year. But Diamond said there are still assignments for the right writers. “A producer might say, ‘This book adaptation requires a strong female voice to capture the spirit of the story.’ That mandate then drives the process, and plenty of writers in the middle range will be considered.”

These are often writers with a few assignments under their belt and maybe one produced credit. “A studio doesn’t mind spending mid- to high-six figures for a writer who is going to build a project from the ground up in the hope that they can also take it to the finish line,” Diamond said. “If the stakes are high enough where they don’t feel comfortable hiring someone young and green, but it’s not high-profile enough to justify a writer with a $2 million quote, then the mid-level writer can emerge.”

Also Read: 8 Ways Hollywood Writers Can Blow It With Their Agents or Managers (Guest Blog)

Diamond said that now young writers (and their reps) have to be more surgical in approaching screenwriting assignments. “It’s really about launching your client with a great piece of material and socializing them in the right way,” he said. “And then, frankly, the really good assignments come to you.”

Agents and managers curate who they put up for assignments, and while a writer might think otherwise, they might not be right for the job. “It can be tricky for (a writer) to see that grid and see they pitched seven other people before you, and you’re asking, ‘What the hell?'” Cox said. “Sometimes the writer’s expectations can be out of whack with reality. That’s not disrespect. The studio might have said they need a high-end closer, for example. You just have to be honest and say, ‘Look, this is what they said and I don’t think we’re there yet.'”

For that reason, most agencies and managers don’t share their grids even with their own clients but instead curate what writer they will put up for a certain assignment. “Agencies are super-protective,” Wagner said.

3. Write for free (for fun and profit)

So how can emerging writers get into the assignment game? One way is work with a producer on a pitch or a spec.

“Maybe they’ve got an article, or the rights to a video game, a book, that is not set up, but they’re looking for the right person to take it in to the buyers and turn it into an assignment,” Wagner said. “In that case it’s totally worth coming up with a take. Think about the odds of that. It’s not you versus four people for a one-shot deal at a studio. If you partner with the producer on it, it’s you versus no one with 15 buyer shots.”

Also Read: Female and Nonwhite TV Writer Hiring Is Up in 2019 Despite Fight With Agencies, WGA Says

Wagner added that it could pay off for the writer in other ways as well: “You’re in the trenches. Developing. Exchanging ideas. Breaking story. If that goes well, it could lead to a lot more work with that producer.”

The down side? There may not be any upfront money. And if you’re working on someone else’s idea, you may wind up with nothing if it doesn’t sell. “There’s always a risk when you don’t control the idea,” Wagner said. “Writers will pitch on video game adaptations, work two or three months on that pitch that isn’t set up, and all of a sudden the video game company decides not to pursue it. There’s nothing you can do.”

Likewise, there are dormant projects that have been kept on the grid for years, orphaned for any number of reasons. “If it’s dead, it’s dead for a reason,” Wagner said. “It’s probably been an inherited project throughout who knows how many studio execs. You might have to wait for a big piece of talent. Like if all of a sudden Spielberg or Chris Hemsworth or are interested, then boom, it’s active again.”

4. Should You Choose to Accept It

Writing assignments are the bread and butter of Hollywood. Screenwriters aiming to play the game have to jump through many hoops, please many masters and come out smelling like roses. Easier said than done sometimes. But with a savvy rep, an emerging or mid-level writer should still be able to find… something.

“I like where it is right now in that these next five years should be a race for content amongst buyers,” Perry said. Aside from the cloud of the WGA dispute with top agencies, he sees an atmosphere in which a lot of companies are buying scripts and other IP. “As a result, (there’s) lots of rewrites, book adaptations and other assignments at the streamers, studios and minis if those places want to be competitive.”