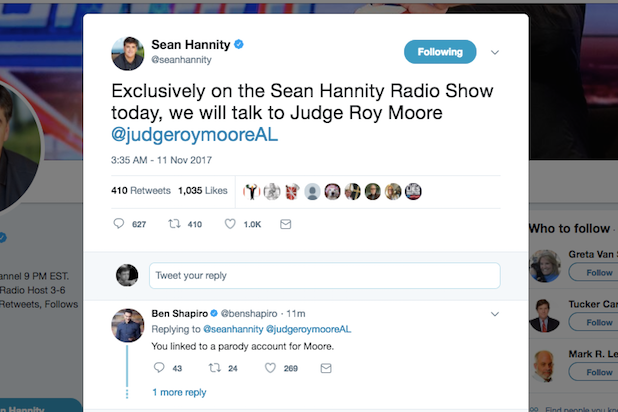 After his robust defense of accused pedophile Roy Moore on his show last night, Fox News host Sean Hannity announced on Twitter that he would have Moore on as a guest on his radio program on Friday

“Exclusively on the Sean Hannity Radio Show today, we will talk to Judge Roy Moore @judgeroymooreAL,” Hannity wote, tagging the judge in his tweet.

Exclusively on the Sean Hannity Radio Show today, we will talk to Judge Roy Moore @judgeroymooreAL

The screw-up was immediately noticed by blue check media types in the comment sections.

Wrong profile. Please delete and use proper one. pic.twitter.com/0j1TweTZiR

Moore faces a growing scandal after the Washington Post published accounts of multiple women alleging Moore engaged in inappropriate sexual behavior several decades ago including with a girl who was just 14 years old at the time.

Despite being abandoned by much of the political class, Moore has strenuously denied the allegations and has vowed to press on with the campaign.