Few shows with the pandemic as part of their premise seem destined to survive post-lockdown, but HBO Max’s “Selena + Chef” shows no signs of slowing down. The socially distanced cooking show returned on Thursday with three new episodes and six more set to roll out in the coming weeks. That’s a total of 20 episodes produced since the series was first announced eight months ago, all filmed using remote technology under strict COVID safety restrictions.

“Making a show where COVID is part of the premise, we definitely felt the need to move fast,” executive producer Aaron Saidman said in an interview with TheWrap. “And to make sure that we could execute this content and get it into people’s homes so they would be able to enjoy the experience of the show while it was still relevant.”

Filmed in star and producer Selena Gomez’s own kitchen, each 10-episode season of the show was shot in about two to three weeks. Every episode pairs Gomez with a different celebrity chef over video chat as they walk her through one of their recipes. Depending on the recipe, filming takes anywhere from a few hours to about half a day, allowing the show to fit into Gomez’s busy schedule.

“When we headed into Season 1, back in March or April, a lot of us producers were wondering, how are we going to continue to make content in the middle of this pandemic? And if so, how can we do it responsibly? And what are those protocols? In many ways, we were inventing and implementing protocols that we had never had to consider before,” Saidman said. “Once we knew what we were doing, once we had created the show and figured out how to make it, we were able to move even faster on Season 2.” 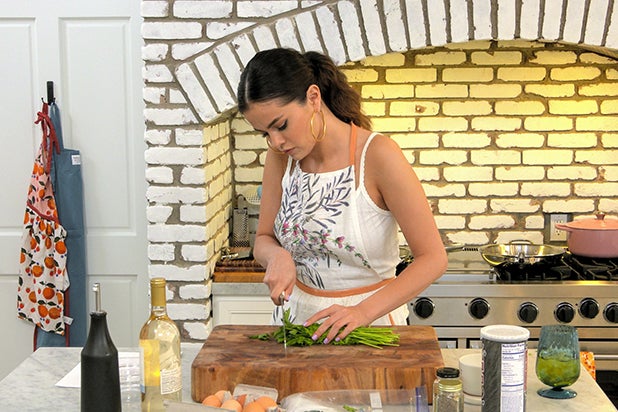 But as the national mood changes, so goes “Selena + Chef,” Saidman said: “We want to be relevant to the times, whatever those times are.”

So fans who have spent the last 10 months perfecting their sourdough bread recipe will still find a comrade in Gomez, who took three episodes to find the convection setting on her oven in Season 1 but has shown growth as a home cook since — at least according to Saidman. “In some ways, it’s what viewers loved about Season 1, and in some ways, you’re seeing a bit of a progression,” he said. “The dishes in Season 2, they’re a bit more challenging.”

The new episodes bring in a new batch of world-class chefs including Curtis Stone, José Andrés and Marcus Samuelsson, but Gomez’s charismatic on-camera presence remains the draw, aided by fast-paced editing to erase any indication of video chat-induced awkwardness.

“She’s so disarming and terribly charming. And she’s so authentically herself in front of the camera, which was not something we knew for sure going in,” Saidman said. “She’s never starred in an unscripted show, [but] she’s very engaging and very authentic. I think she shrinks the distance between the viewer and what’s going on in her kitchen and allows you to feel comfortable in there by being so self-deprecating. She will be honest about what she doesn’t know, she genuinely wants to learn. I think that comes across.”

Where the show goes from here, though, remains up in the air. The premise at the outset was that Gomez, who doesn’t know how to cook, uses her time in lockdown to learn from celebrity chefs. Is there a version of “Selena + Chef” that exists post-pandemic? Or one where Gomez’s skills have progressed past the point of being unable to identify cilantro in her own refrigerator?

“If we continue on, and if the audience responds and wants us to do more, that will be a fun conversation with Selena to figure out what she’s interested in doing, and how can we make sure that whatever we continue to do has the same sort of relevance,” Saidman said. “I do think after a certain point, though, it’s possible that viewers will like and will be very comfortable with Selena Gomez in the kitchen, trying various recipes, to the extent that, hey, it’s just a really entertaining television show. Once you strip away COVID, it doesn’t mean that it’s not still really enjoyable to just hang out with her in the kitchen, and maybe learn a little something along the way.”

“Selena + Chef” is produced by The Intellectual Property Corporation (IPC), an Industrial Media company. Gomez serves as executive producer via her July Moon Productions banner, along with Saidman, Eli Holzman and Leah Hariton of IPC.

The first three episodes of “Selena + Chef” Season 2 are available to stream on HBO Max.