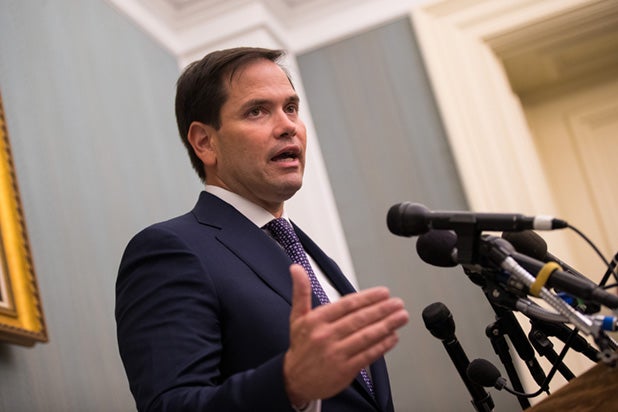 Sen. Marco Rubio’s tweets about the horrific shooting in his home state of Florida were just too much for critics who quickly pointed out that he has received $3.3 million in campaign contributions from the National Rifle Association.

The New York Daily News pointedly reported how much Rubio and other pro-gun senators have received from the group — which takes a hard stand against gun-control legislation — after 17 died in the nation’s latest mass shooting.

“[Rubio] received $90,205 in campaign donations from gun rights groups during the 2015-2016 campaign cycle and received an “A+” grade from the NRA. Rubio has received $3,303,355 over the course of his career as an elected official,” the paper wrote on Twitter, linking to Rubio’s own tweet about the shooting.

Also Read: Will Florida Become Yet Another Mass Shooting We Forget?

.@marcorubio received $90,205 in campaign donations from gun rights groups during the 2015-2016 campaign cycle and received an "A+" grade from the NRA. Rubio has received $3,303,355 over the course of his career as an elected official. https://t.co/Y8EJPrCR5V #thoughtsandprayers https://t.co/OKBHuajKeT

The Daily News made similar posts calling out other senators who appeared on their list of the top 15 recipients of NRA money, including Ron Johnson of Wisconsin, Ted Cruz of Texas, Pat Toomey of Pennsylvania and Rob Portman of Ohio. The paper also called out President Donald Trump in a series of tweets noting his close relationship with the organization.

The New York Daily News isn’t the only one to call out Rubio and his Republican colleagues on the apparent hypocrisy of lament gun violence in America while simultaneously voting against gun control legislation and accepting donations from the NRA.

For years, Igor Volsky, a former Think Progress editor and founder of activist group Guns Down, has made a similar project of using politicians’ “thoughts and prayers” tweets after mass shootings as opportunities to highlight their campaign contributions from the gun lobby. On Wednesday, he also recalled Rubio’s 2013 vote against a bill to ban assault weapons in the wake of the school shooting in Sandy Hook.

Here's a screenshot showing @marcorubio voting "nay" on a bill to ban assault weapons like the one used in today's school shooting in Florida.

In other words: Rubio and every other senator who voted NO on this have blood on their hands. pic.twitter.com/x8uDwLAtxw

If this tweet doesn’t anger you enough, imagine Rubio dictating it while counting the $3.3M he’s taken from the NRA since 1999. https://t.co/Em9jPhtDXF

“That day you look at the pile of money you got from the NRA & it forms into the shape of the Grim Reaper & tries to high-five you.” https://t.co/ic5FXnj8dg

.@marcorubio Right. That’s what assault rifles are meant to do. You voted against banning them. You have blood on your hands. https://t.co/kueEfW3euB

And yet your not an idiot so you know that day WILL come because leaders like YOU refuse to pass sensible gun reforms.

On Wednesday, 17 people were killed and at least 14 more were injured when a gunman opened fire on Marjory Stoneman Douglas High School in Broward County, Florida. The suspect was later identified by law enforcement officials as Nikolas Cruz, a former student expelled for disciplinary reasons.