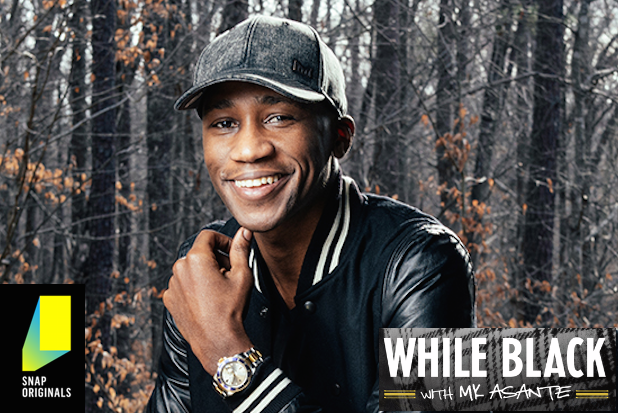 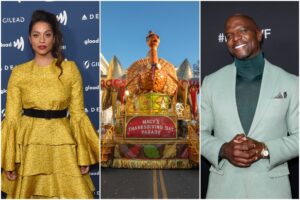 ”To me, this show is about transforming observations into obligations,“ creator MK Asante says about Snapchat’s new docuseries, which highlights serious topics like gun violence and racism

Snapchat is looking to expand beyond its roots and have its shows touch on heavier topics.

That much is clear, after the recent debut of “While Black,” a new docuseries focusing on several issues facing young African-Americans. Each episode highlights on one serious topic, from gun violence to police brutality, using firsthand video shot on smartphones and interviews with young black men and women to tell its story.

“While Black” is spearheaded by creator and host MK Asante, a 21st Century renaissance man who has authored several books, including “Buck,” his acclaimed 2013 memoir, as well as directed, produced and co-written the documentary film “The Black Candle” alongside his mentor Maya Angelou. (The series is produced through Snap’s joint venture with NBCUniversal, Indigo Development and Entertainment Arts, along with Main Event Media.)

Asante, while discussing the show with TheWrap, said “While Black” is more than just a vehicle to point out injustice. Instead, he wants to find answers to complex problems.

“I believe if you make an observation, you have an obligation,” Asante said. “Which means for me, if I observe something, it’s not enough to just see and observe it, I have to be part of the solution. For me, this show is the observation  — and it’s a call to action.”

“While Black” is a departure from the usual Snapchat series. The popular app, which hit 210 million daily users during Q3, has mostly looked to shows featuring influencers and light-hearted topics that would appeal to its loyal Millennial and Gen Z users. Now, Asante is aiming to leverage Snapchat’s quick-hitting 5-minute show format to call attention to topics most Snapchatters might not spend a lot of time thinking about. This, he hopes, will foster change moving forward.

Asante recently talked to TheWrap about why he created “While Black.” Check out the interview below:

What were you trying to accomplish with this show?

Snap is obviously an innovator when it comes to mobile storytelling, so the goal was to tap into Snap’s storytelling background and use that platform to inspire and empower that generation and get them thinking about critical issues.

Obviously, theres a lot going on in the world right now, and it’s a time to be involved. Snap has a vision to do that, and it aligned with my vision and all the other partners involved with this show. It was the right time to tell stories that need to be told. It was the right time to be the voice for the voiceless. a lot of the people we feature in this show are people who’s stories wouldn’t be out there unless we told them.

You touch on heavy topics on the show like gun violence and racism. Why did you want to look at these?

We featured this young lady, Skya Holsey, who saved a young man’s life by basically filming the police while they had the guns on him, and it went viral. I compared her to Ida B. Wells, the freedom fighter in the early 20th century, and her thing was being against lynching; Ida B. Wells spoke truth to power about lynching. At that time, there were lynchings almost on a daily basis in America. She was an advocate against lynching and her writing and organization skills helped prevent some lynchings and change the laws in America.

So when I look at Skya Holsey, I said to her, if Ida B. Wells had a smartphone, what do you think she’d be doing? She’d be doing the same thing Skya Holsey is doing. She’d be going around, making sure the police are accountable, making sure brothers and sisters aren’t being lynched.

To me, this show is about transforming observations into obligations. But then it’s about having the conversation. Since this show came out, I’ve got so many emails, Snaps, DMs, from all walks of life and all over the world. Some of them are asking genuine questions, saying, “I didn’t know about this. Thank you for educating me; tell me more.” And then of course, you have the Russian bots telling me to go kill myself and s–t like that. (laughs) But 99% has been positive.

If there is one episode, in particular, which one would you recommend and why?

There’s a very personal episode about my nephew. We talk about gun violence, and gun violence is obviously a huge issue in our country. It affects all of us. My nephew is 19-years-old, and basically he’s like a son to me. He’s been shot 9 times — 6 times when he was 16 and 3 more times when he was 17. And he’s alive, he’s healthy, he’s healed, and he’s making music. We featured him talking about gun violence, but also talking about his perseverance.

That’s the difference between this show. Yes, we can talk about gun violence, but we’re (also) talking to people you never see and never hear from. A lot of it is, being a voice for the voiceless. What does [my nephew] Nasir have to say? He’s 19 and been shot 9 times. Let’s hear what he has to say about PTSD. Let’s go to Philly. We spent time really invested in making sure these stories were told authentically and done so with sensitivity, because they’re really heavy topics and these are real people. Even when we talk about police brutality, what’s missing? It’s recognizing the humanity of other people. These are people, and that has to be recognized. These things aren’t just headlines and things you can swipe past, these are deep issues that affect real people. Martin Luther King talked about how we’re all connected indirectly. We’re in this labyrinth of inner-connectivity. and the show recognizes that, that’s why we’re reaching all different walks of life. We’re all connected.

The show features videos recorded on phones. Do you think being able to capture racist moments on your phone is better for us, because it allows us to shine a light on it? Or is it potentially worse because it can drive people apart?

No, I think it’s helpful. Because before the smartphone, there was a divide. I’d tell my white friends certain things, and they’d be like, “Dude, nah, that didn’t happen,” or “Why would a cop stop you for no reason?” or “Why would a cop beat the s–t out of you for no reason?” It didn’t make sense to them because it’s so removed from their experience. You can tell someone, “I didn’t do anything” or “I was just walking to my apartment and they followed me.” You can tell people that, but like people say these days, “Send me a pic or it didn’t happen.”

It really is helpful for a lot of people to see what’s happening. We say on the show, racism, misogyny, injustice, hatred, bigotry, xenophobia all like to move in silence. None of it likes to be exposed. That’s why the phone has become weaponized by people who would otherwise be victims, and now they can use that as a weapon to defend themselves to society. It’s helpful because if  you don’t have that, what do you have? It becomes whose word are you going to believe?

The footage really helps other people take a look and say ‘What’s going on here?” Things you wouldn’t believe. Videos we have on the show — a cop pulls a guy over and shoots him, unarmed, within a few seconds while he’s complying. Without that footage, how do we know it happened? This is an accountability thing, ultimately.

“While Black” touches on a number of serious contemporary topics. Are there any issues facing the black American community that have improved in the last 5 years — something you’d want to feature in a future episode of “While Black”?

Let me make this clear because this is really important: the show is inspiring and empowering. So even though we’re talking about heavy issues, that doesn’t mean we’re talking about them from the perspective of having a victim mentality or from the perspective of being defeated or depressed. It comes from the perspective of, because we love America, that’s why we’re critical. When you love something, you are critical. You have to be. That’s the responsibility of your love. We’re critical because we want to make a better world. Every person we feature on the show is trying to change the world and make it a more positive place. All the featured [people] on the show are young, African-Americans who are trying to make the world a better place through different avenues.

So when I look at the last 5 years, I see a tremendous amount of progress, in so many ways. I see more representation in the media, I see more creators, and I see more black women supporting each other. I’m a professor — I teach at Morgan State University, a HBCU — and I have more students in my classroom than ever before.

“While Black” is about progress. One of the things we say on the show is we’re going to take you on a journey about what it means to be young, gifted and black. To be young, gifted and black is to not only experience racism and police brutality, that’s not the extent, at all, of the experience. That’s one aspect of the experience that we fight against. It is such a brutal thing, but that is not a comprehensive experience of being black. So we deal with a lot of other issues and topics, and it’s always coming from this place of empowerment and inspiration, not leaving you feeling like “oh man, that was a drag.” No, that’s not the feeling you’re left with while watching “While Black.”

One Trump Media SPAC Investor Has Already Pulled Out