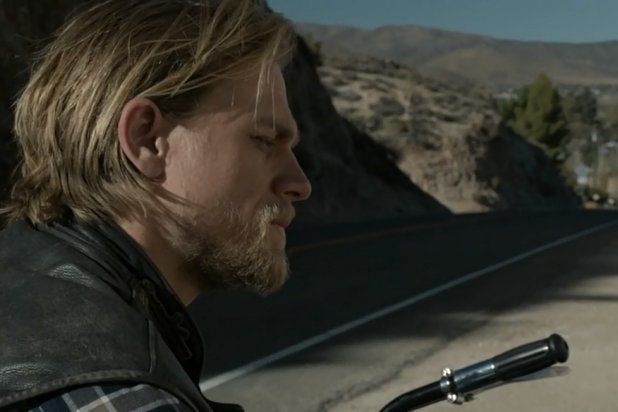 Spoiler alert: Do not read on if you have not yet seen the series finale of FX’s “Sons of Anarchy” entitled “Papa’s Goods,” and don’t want to be spoiled.

What was left for Charlie Hunnam‘s Jax Teller to do in the series finale of Kurt Sutter‘s long-running love letter to William Shakespeare‘s “Hamlet”? He’d already lost his father, his best friend, his stepfather and his wife. He presided over one of the bloodiest chapters in the history of his beloved motorcycle club, losing manyalong the way.

“Sons of Anarchy” began with Jax determined to change the direction of SAMCRO. He was going to move the club into legitimate enterprises and finish the work that his father had started. Of course, his father’s legitimate ambitions led to his not-so-accidental death when he was hit by a semi truck.

What Jax didn’t know was that it was his stepfather, with a little help from his mother, who orchestrated that whole thing. This revelation changed Jax’s course into one of darkness and revenge, and it proved a path he was never able to escape.

One by one, as his friends and loved ones were taken out, it was almost always at the hands of people he loved. And Jax proved no better than any of them, bloodying his own hands on more than one occasion, and in some cases dispatching of some of his own closest friends and allies.

The body count for “Sons of Anarchy” has been very high, but there was one more body to be dealt with heading into Tuesday night’s season finale: Jax himself. Would he survive Sutter’s bloody tale? Should he?

Jax was too far gone to earn any sort of hero’s redemption in this dark saga. He’d murdered and killed for petty and selfish reasons, and sought revenge over justice at just about every opportunity. Jax was no better than the criminals and lowlifes he so despised on the show’s early seasons. He may have aspired to more, but he ultimately had to settle for far less.

Still, Jax loved his family, and that included the Sons of Anarchy. His final act was one of inevitability, but also one of sacrifice. He knew there was no way out for him, and so he wanted to do his part to protect the club.

He also finally did right by his children, giving them to Drea de Matteo’s Wendy and urging her to leave Charming and never come back. He also told her to tell them the truth about their father; that he was a criminal and a murderer. His hope was that they would never follow his path as he followed his father’s.

In his final act, Jax killed the men looking to take down the club. He then climbed on his father’s motorcycle and headed for the open road, with a swarm of police hot on his tail. Jax had no intention of turning himself in. He was just seeking a poetic end, perhaps.

He found out in the form of an oncoming semi truck. Jax lifted his hands and let history repeat itself.