Stephen Colbert, what have you gotten yourself into?

While comedy can’t be quantifiably measured (yet), the overall impact of late-night talk shows can be, for better or worse. There’s Nielsen ratings, social media metrics, and even the host’s Q Scores, which is a measurement of the popularity and likability of a personality.

Across pretty much all of those data sets, Jimmy Fallon is indeed the late-night king. He certainly rules the roost in ratings, but he’s also top dog on Twitter and YouTube. And, thanks mostly to women, he’s now overtaken the more male-skewing Colbert himself to become the most-liked late-night host on broadcast TV, per the Q Score Company‘s summer survey. Interestingly enough, essentially the only statistic the “Tonight Show” host ranks No. 2 in is Facebook likes as an individual personality, sitting behind James Corden by a surprisingly wide margin.

Still, newbie Colbert is very well-liked and he already has Jimmy Kimmel personally beat on Twitter — but TV ratings and social reach for the new show remain to be seen, though the “Late Show’s” YouTube page has hit the ground running.

Below is the late-night landscape that Colbert enters tonight, by the numbers. It is worth noting that the average Positive Q Score for all TV hosts is a 17. 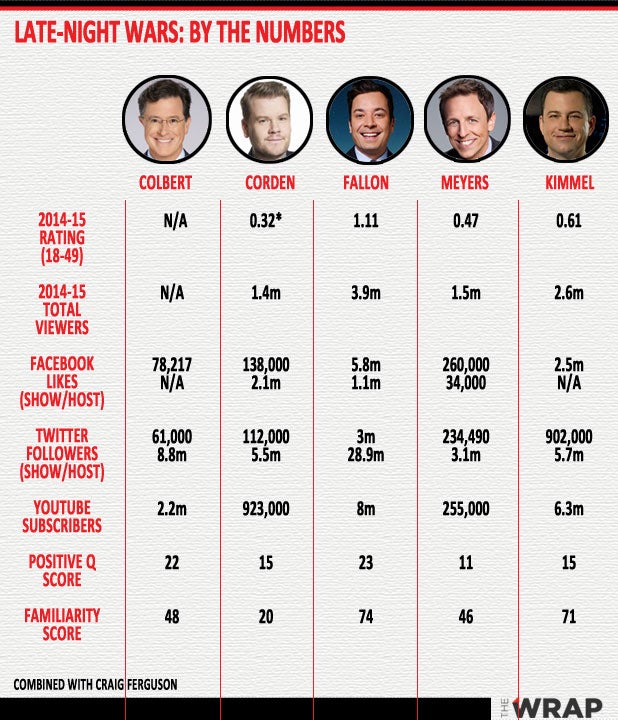 See the gallery below for a comparison against the current popularity rankings. TheWrap conducted that Q Scores study in early 2014.