OK, so Megyn Kelly’s not exactly killing it in TV ratings, but plenty of the actual entertainment primetime shows on NBC are.

Thus far, the home to “America’s Got Talent” and its new companion “World of Dance” is the only broadcast network up in total viewers versus the same time last summer. Not only are the other three of the so-called “Big 4” down from Summer 2016, they’ve each dropped double digits on a percentage basis.

Sans sports and news programming, NBC is No. 1 in both the key 18-49 demographic and among overall audience members, averaging a 1.1 rating and 5.191 million total viewers. Respectively, those numbers mean NBC is down 8 percent and up 3 percent when compared with the end of last May to this same point in June 2016.

These Nielsen numbers also reveal something that Fox must be pretty pleased with this month: “So You Think You Can Dance’s” host channel is the only broadcaster steady with last year’s demo numbers. Of course, Fox had a pretty modest starting point to match, though new shows “Beat Shazam” and “Love Connection” are helping to keep it there.

Tied with Fox thus far, ABC is down 20 percent among adults 18-49. CBS is doing even worse, with a 25 percent decline versus its most recent benchmark. In total eyeballs, the Disney-owned broadcaster has sunk 13 percent, Fox dropped 11 percent, and CBS slipped 10 percent.

If we included sports in this study, ABC would be doing better than the competition, but the net would still be down versus last year, when it had a stronger NBA Finals series. NBC’s Stanley Cup Finals are also omitted from this story.

Below are the full standings through the first four weeks of the Summer 2017 TV season, with comparisons to the prior year. The use of Nielsen’s “most current” stream means this data includes a week’s worth of delayed viewing where available. 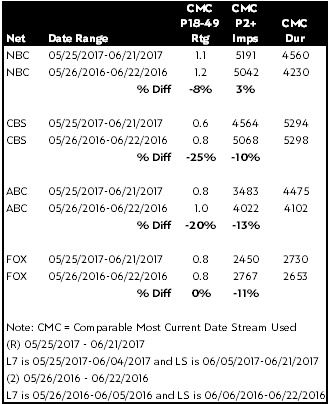 NBC has won the last four summers in a row in entertainment programming only, and we see no reason why 2017 will buck that trend. Someone Photoshop a picture of Bob Greenblatt sipping a mai tai by for the pool for us, will you? For now, “AGT” judge Simon Cowell applauding himself atop this post will have to do.