Hundreds of millions of Apple fans were prepared for the company to unveil its new top-end iPhone at the first event ever held at the Steve Jobs Theater in Cupertino, California, on Tuesday — and the company did not disappoint, announcing the $999 iPhone X, equipped with facial recognition software and no home button.

But Apple also surprised with a big Apple Watch announcement, and a 4K Apple TV that’s built to show the latest hits in all their glory — and just in time for Apple to pour $1 billion into original content.

Here are our 7 takeaways from today’s Apple event:

As the event kicked off, the lights dimmed and a voice came down from above. It was Apple patriarch Steve Jobs — who passed away in 2011 — welcoming the crowd to the newly christened Steve Jobs Theater.

“So … we need to be true to who we are and remember what’s really important to us,” said the ethereal voice of Jobs, as piano music played. “That’s what’s going to keep Apple Apple, is if we keep us, us.” 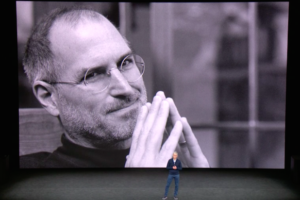 It was a fitting, dramatic, and yes, kind of creepy way to start the event. Apple CEO Tim Cook then took to the stage, and spent the first few minutes talking about Jobs and how important product launches were to him.

“It was only fitting that Steve should open his theater,” said Cook, seemingly misty. “He loved days like this.”

2) iPhone X: Worth the wait

After months of speculation and leaked images, anticipation from Apple fanboys reached a fever pitch over its new foundational device heading into Tuesday. In the end, the hype was warranted. A quick rundown of its features: Facial-recognition, the banishing of the ubiquitous home button, improved camera and video capturing, and augmented reality apps, make iPhone X the high-end smartphone people have been clamoring for. Not to mention, it also has animated emojis, allowing users to add their facial expression to their favorite icons — in case you’d been patiently waiting to add your face to the famed poop emoji — and can afford to pay $999 for the privilege.

3) Apple Watch, all grown up

Cook was quick to point out the milestones Apple Watch had reached — increasing its sales 50 percent year-over-year, and becoming the most popular watch in the world — although he still hasn’t revealed the exact number of smartwatches the company has sold. But with the debut of the Apple Watch Series 3, that might change by next year.

The new Apple Watch reduces both the company and the customer’s dependency on the iPhone — by making it operate independently of the phone. Its cellular-enabled, allowing users to go for a run without having to stash their iPhone in their pocket. Apple Watch is now water and dust resistant, too.

4) Apple TV looks cool, but where are the shows?

As expected, Apple unveiled a 4K version of the Apple TV with four times the graphics processing power of the old model. And while Apple announced some new content capabilities, most notably a “live sports” tab integrated with ESPN that alerts users when their team is playing or a good game is going on, there wasn’t anything new in the original content world. After bringing on veteran Sony TV execs Jamie Erlicht and Zack Van Amburg and committing $1 billion on original content over the next year, some thought the first event at the Steve Jobs Theater could see the company lift the curtain on some new programming announcements. Not today.

5) Augmented reality is here — for real

Augmented reality has generated plenty of hype in recent years — the “Pokemon Go” mania helped with that — but with Apple, America’s most important phone manufacturer, explicitly designing its latest generation of phones to support virtual reality gives it the type of foothold in the market it simply hasn’t had before. Being able to superimpose stats on a live game or a map on the sky are features that go beyond novelty to legitimately useful, and AR gaming — as Apple demonstrated with an experience from Directive Games at the event — could be a significant new selling point for the iPhone. 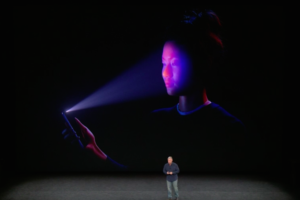 Apple’s new flagship iPhone X unlocks by looking at your face (technically, it generates an infrared image of it and processes it through something called a neural network). That seems convenient, if a little creepy and fraught with some obvious concerns (what about sunglasses or unexpected changes in appearance?) but the treasure trove of photo data the feature generates seems valuable for manufacturers. We aren’t even sure how well FaceID works yet — but it’s likely to be in plenty of phones in the future.

“It’s a type of beauty, and you can’t define beauty,” said Woz. “It doesn’t have words, it doesn’t have numbers. You just kind of see it and you know it.” Never change, Woz.

This is Woz talking about what Steve Jobs would have thought of Apple's new campus. #AppleEvent pic.twitter.com/0RToYAsfkG