In “The Blacklist,” a “Silence of the Lambs” meets “Homeland” procedural on NBC, James Spader chews all the scenery, smacks his lips and looks around for more.

His character, Raymond “Red” Reddington, is a fugitive who turns himself in at the start of the pilot episode, and shortly thereafter insists that he work with newbie FBI profiler Elizabeth Keen (Megan Boone) to avert a terrorist attack on a general’s daughter.

Why her? Red’s fixation with Keen is never entirely explained in the first episode, although there are hints that she and her husband Tom (“90210’s” Ryan Eggold) aren’t the happy young couple they initially seem. 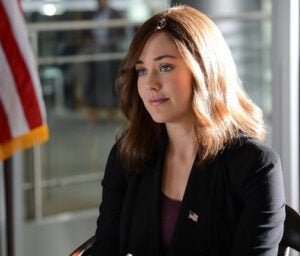 The newbie and criminal sophisticate quickly establish a Hannibal Lecter-Clarice Starling dynamic, much to the consternation of fellow feds who have been tracking Reddington for years. The assistant director of the counter- terrorism unit and his brusque case agent can’t help but wonder why Elizabeth Keen’s been singled out on her first day by a wanted man.

Even she doesn’t seem to have a clue.

But he knows all about her and her rough past and persists in asking her personal questions. Part mentor, part tormentor, he hones in on Keen’s insecurities and affinity for the criminal mind, prodding her to figure out how to thwart the terrorist attack by a Serbian suspect he may or may not be helping.

“You won’t find the girl until you’ve learned to look at this differently,” Red instructs her in the pilot. “Like a criminal. It may come easier than you think.”

The enigmatic Reddington, once a standout student at the Naval Academy, proves extremely wily. Like Lecter, he enjoys the finer things in life, and he never tires of reminding feds of his mastery.

Spader plays his scenes with relish. It’s fun to watch. So are the stylish action scenes.

There are also subplots involving Keen’s husband – a seemingly earnest helpmate in a corduroy jacket – and the couple’s quest to adopt. These mainly highlight the contrasts in Keen’s ambitions, her past and the demands of her new job.

They are also the weakest part of the show. Boone is simply out of her league compared to Spader: She can’t sell her rough past or ambition the way Jodie Foster could in “Silence of the Lambs.” Admittedly that’s a high bar, but her character falls way short, failing to demonstrate much steel or street smarts.

She isn’t even convincing as a crack profiler. Her husband’s behavior doesn’t add up either.

These characters – and the attractive actors playing the roles — may develop in time, but at the outset, they serve as little more than window dressing. In the meantime, there are other promising workplace relationships to explore: case agent Donald (Diego Klattenhoff) shows shades of jealousy and derring-do, while Agent Cooper (Harry Lennix) brings an Obama-like demeanor to the proceedings.

But most of all, the premise of this show is promising enough to warrant a return visit: A charismatic turncoat of mysterious motivation teams up with feds to track down a blacklist of dangerous terrorists so underground that the government doesn’t even know about them? Sign me up. Especially when that guy is played by an actor as interesting as Spader.

“The Blacklist” will compete against “Hostages,” another political thriller with a starry cast.

“The Blacklist” premieres Monday at 10/9c on NBC.