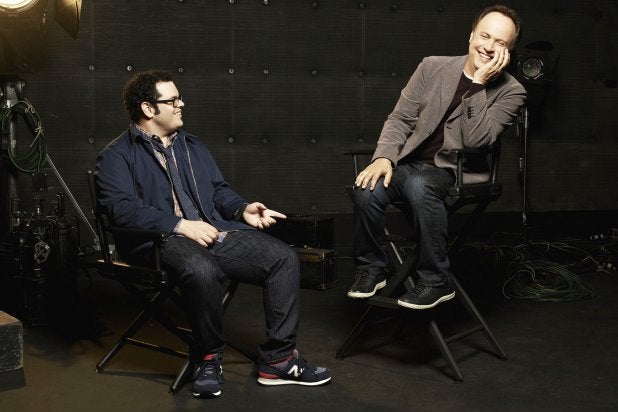 Taking a page out of the books of premium cable series “Curb Your Enthusiasm” and “Episodes,” Billy Crystal and Josh Gad‘s new FX comedy features the actors playing versions of themselves. And boosting the meta element a step further, the series is about the pair coming together to develop an FX comedy. The conceit of their comedy partnership in the show is that they really don’t share any chemistry and they kind of don’t like one another.

It’s certainly an unlikely duo on paper. Crystal is twice Gad’s age, and about the only commonality they share is a love for comedy and their involvement in blockbuster Disney animated properties (“Monsters, Inc.” and “Frozen,” respectively). “The Comedians” creators know this whole concept makes no sense, and the mismatched pairing proves to be the very heart of the comedy.

FX gave critics the first nine episodes to watch, and this would have been a very different review had I stopped watching after the first few.

My first impression was that this show was struggling to find its voice in those early episodes, while I found myself questioning the casting of Crystal and Gad together, but I now think it was perhaps too sure of itself. As Crystal discusses with one of several big-name guest stars in an early episode, comedy partnerships are all about chemistry. If that’s off, then even the best jokes can still fall flat.

The fictional Crystal and Gad have zero chemistry as the series launches, which becomes a pivotal part of the plot as the series progresses. Unfortunately, their real-life counterparts portrayed this lack of comedic chemistry so well in the beginning that it not only impacted the development of  show within the show “The Billy & Josh Show,” it was leaving a lukewarm first impression of “The Comedians” as well.

It’s a shame, because viewers are going to have to wait a month or more to really see how sharp and funny this show is, and how great Crystal and Gad are together. By the time Crystal’s birthday rolls around in the seventh episode, their relationship has become endearing and believable, with Gad offering Crystal both the best and worst night of his life in celebration.

But that’s a long time to ask viewers to wait around to fall in love with these characters. If ever there was an argument for the Netflix model of distribution, “The Comedians” might just be it.

The other thing about the show that could be disconcerting to some, considering its pedigree, is that it’s not laugh-out-loud funny. It’s a comedic approach FX seems to enjoy with some of their comedies, though they’ve received mixed results from critics and viewers. “Louie,” for example, is barely a comedy at times, and has been embraced as genius television, while “Wilfred” balanced absurdism with pathos and was met with a lukewarm response.

“The Comedians” plays more like a dramedy, though maybe that’s just a way to say that it’s a comedy with genuine heart, character development and depth. This isn’t trying to be the next “It’s Always Sunny in Philadelphia” or “The League.” It’s not about barraging the audience with jokes so much as it’s about finding humor in these slightly off characters.

Or in some cases, more than slightly off. Stephanie Weir may well be the breakout star of the show, though it’s disappointing she wasn’t given a more innovative role. The actress, best known for her years on “MADtv,” plays the frazzled producer of the show with gusto. She turns in some fantastic physical comedy and manages to make the most dark and depressing material come across hysterically, but she’s also kind of the exact same character as Kathleen Rose Perkins‘ Carol Rance on Showtime’s “Episodes.”

Production assistant Esme, portrayed by Megan Ferguson, is yet another analog to a similar character from a similar show, channeling Katrina Bowden’s professional disinterest as Cerie on “30 Rock.” Both women are young and beautiful, and don’t really do the jobs they’ve been hired to do. And both women are lusted after by the unkempt and perpetually disrespected writers.

While Matt Oberg’s spineless head writer Mitch might be a bit of “30 Rock’s” hapless Lutz (John Lutz), he at least has the potential to spin an interesting story with his sad-sack attempts to woo Esme and his moonlighting in various improv groups. Unfortunately, the writers seem determined to keep all of these supporting characters firmly in the shadow of the show’s two leads for now.

Weir did get to enjoy a b-story in the early going of the series based on her past with the sketch show’s second director (perhaps the most surprising guest performance). Those scenes illuminated the way her mind works, peeling away a few layers of her beautifully fragile and damaged psyche. There is comedic brilliance in that character and that actress just waiting to burst forth, if given the opportunity.

Within a few episodes, though, she faded again into the background with the rest of the supporting characters. For the most part they only emerge for tiny comedy bits, like Esme’s explosive battle with the copier.

The creative team behind the show — which includes Crystal, Ben Wexler (“Still Standing”), Matt Nix (“Burn Notice”) and Larry Charles (“Seinfeld”) — knows how to build a solid ensemble, but they’re not doing it here for some reason. It truly is “The Billy & Josh Show,” which is kind of a shame.

Perhaps by the end of the show’s 13-episode season, we’ll have finally been treated to more with the supporting cast. After all, it took seven episodes for Crystal and Gad’s on-screen chemistry to finally click. Maybe it’ll take a dozen episodes for the rest of the cast to emerge as fully-fledged and important parts of this show’s ensemble. Will viewers be patient enough to wait … and more importantly, come back each week?

“The Comedians” premieres Thursday night at 10 p.m. ET on FX.