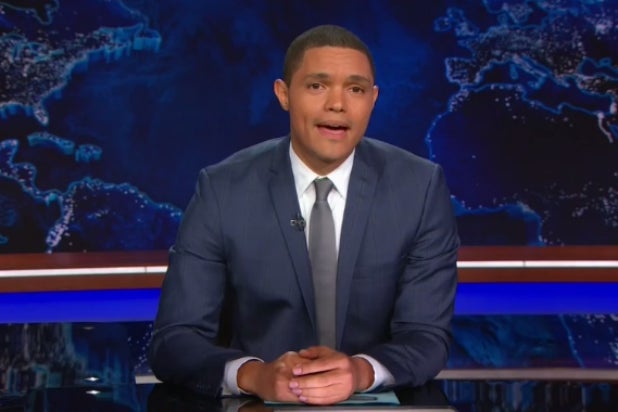 At the end of his first segment as host of “The Daily Show,” Trevor Noah thanked , the man whose seat he filled, for believing in him. Then he added, “And I’ll make you not look like the crazy old dude who left his inheritance to some random kid from Africa.”

Noah, a 31-year-old South African comedian who was all but unknown in the United States when he was tapped by Comedy Central (and blessed by Stewart) to take over the network’s late-night flagship, struck many as a random choice to lead a show as important and beloved as the one he now hosts.

But he proved in his debut Monday night that he was far from a risky proposition. Noah was polished, funny and most of all cool. While his tone of amused outrage was similar to Stewart’s, the simple facts of his youth and his looks — never in his life wore a suit that well — separated Noah from his predecessor.

What we didn’t get last night was a sense of experimentation. The show’s opening sequence has new graphics, but the same music. The desk is different, as correspondent Jordan Klepper pointed out in mock panic during one segment, but it’s not all that different. And the rhythms of the show are exactly the same.

After his introductory monologue, Noah did a solo bit from the desk about Pope Francis, then a bit about House Speaker John Boehner including a back and forth with Klepper. After commercial break, he teamed with new correspondent Roy Wood Jr. for a segment about Mars. Then another commercial, and back with an interview with comic . Then commercial, then moment of Zen.

During the Boehner segment, Klepper made reference to some of the buzzwords that were thrown around as Comedy Central made its big marketing push for Noah — “global perspective” and “youth” among them. Noah himself referenced people watching on their phones in his opening segment.

But for all the talk about how the new “Daily Show” would mirror the new way in which news is consumed — aspiring to do for the digital age what Stewart did for the cable-news era — we saw none of that Monday night.

But what we did see was a show that looks very, very promising. Noah was strongest during his opening and the Pope segment. But he understood in the exchanges with the correspondents that it was his job to let them shine. Interviewing Hart, as big a comedic personality as there is in circulation right now, he wisely let the guest do the heavy lifting.

Noah has obscenely big shoes to fill, largely because of the way Stewart straddled the line between funnyman and newsman, establishing himself over a decade and a half as blue America’s truth-teller in chief.

Noah paid tribute to Stewart at the top of the show, but spent the rest of it demonstrating that he has no intention of shrinking away from an almost impossible task. He looked like he was enjoying himself throughout the half hour — a key quality in today’s late-night landscape.

But most of all, he looked like a guy who might have the audacity to try to replace . And that he just might pull it off.