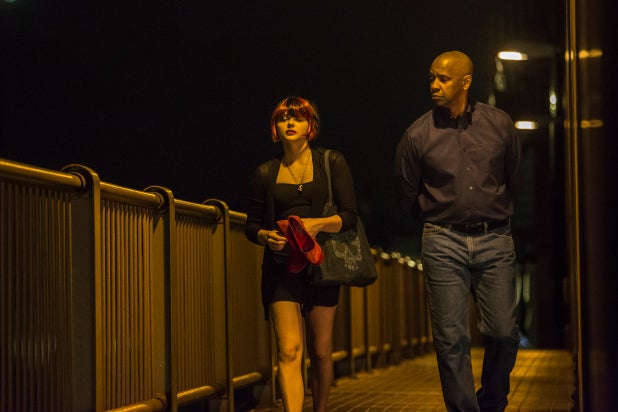 After a summer of “action” films that mostly involved their stars posing, pointing and prancing around in front of green-screens so the special effects can do all the work, a street-level film that shoots for punch-to-the-face thrills (both literal and figurative) goes a long way.

So it is with “The Equalizer,” a big-screen revamp of the 1985-’89 TV series, with Denzel Washington taking the title role from Edward Woodward.

The film’s script might be a little on the nose with its metaphors, and there are a few moments of action that verge on self-parody, right down to the familiar trope that cool guys don’t look at explosions as they walk away from them. But at the same time, seeing Washington reunited with his “Training Day” director Antoine Fuqua is reason enough to celebrate, as well as the film’s resolutely R-rated violence and its moody, Boston-based urban noir look and feel.

Anyone expecting kick-started action from the jump will be mildly disappointed; Fuqua and screenwriter Richard Wenk (“The Expendables 2”) instead spend time establishing Washington’s life and times as Robert McCall, a solitary man who works at a home-improvement warehouse and lives a life of ritual and quiet as a bulwark against chaos, sadness and the past. When insomnia strikes, he goes to a local diner — almost a duplicate of Hopper’s “Nighthawks,” in a nice touch — and chats with regulars like escort Teri (Chloë Grace Moretz), whom McCall does not judge.

When Teri is beaten savagely, however, McCall leaves his quiet life behind; he used to be a killer, and he still is one, no matter how hard he tries to hide behind his copy of “Don Quixote.” As he explains the book to Teri — “It’s about a man who wants to be a knight, even though he lives in a time when there are no knights … ” — even the least literate viewer should get the subtext.

Washington is terrific here, a blue-collar Bourne far from the champagne sophistication of Bond, his astonishing physicality springing out in his action scenes and in his decisive moments while still suggesting the calm, collected thought before each brief burst of violence. Washington is that rarity: an action-film star capable of gravitas and feeling, an actor capable of selling fight sequences and carefully contemplated plans that form in the instant between seconds.

Cinematographer Mauro Fiore (“Avatar,” “Training Day”) shoots the film with an emphasis on clarity and comprehension, but he also captures the bruise-blue dark nights on the Boston streets as well as the lens-flare dawn that comes after the darkness. Editor John Refoua (“Olympus Has Fallen”) keeps a firm hand on the film’s careful, measured pace, as circumstances build until they demand a response from McCall, resulting in action that accelerates until the final denouement in McCall’s workplace, where he proves himself both handy and homicidal.

Wenk adds some nice touches — McCall’s depicted as lightly obsessive-compulsive, and the film offers a few grim laughs between murders — while skipping over some of the scenes you’d expect in an enterprise like this. But the film’s bad guy, a Russian mob fixer played by Marton Csokas, is so generic as to be almost invisible.

There are a few moments in the film that exist in a slightly different context in light of recent events (Washington violently and calmly taking down wave after wave of arrogant, racist, corrupt Boston cops, for one example), but it largely shuns political commentary in favor of a simple conflict between human decency and very specific skills on one side and animal-like criminals and thugs on the other.

Moretz is fine, earning our sympathy even as she teeters toward disaster in stiletto heels; Bill Pullman and Melissa Leo have brief but engaging moments as well. Willfully empty but wildly entertaining, “The Equalizer” stands out from its peers like a wolf among lapdogs, as Fuqua and Washington bring out the best in each other for the benefit of the audience.

The film’s coda suggests the possibility of further adventures for the resolute and righteous Robert McCall; for once, that seemingly obligatory finale for a would-be franchise feels more like a promise than a threat.