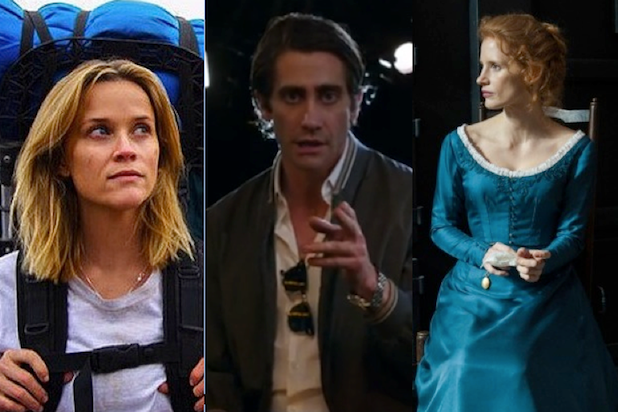 The fall’s biggest festival will provide a showcase for such stars and awards hopefuls as Jessica Chastain, who plays the title role in “Miss Julie”; Denzel Washington, who takes the role played on TV by British actor Edward Woodward in Antoine Fuqua’s “The Equalizer”; Julianne Moore, who won the Cannes’ best-actress award for “Maps to the Stars” and also appears in “Still Alice”; Kristen Stewart, who also appears in both of those films; Jake Gyllenhaal, who stars in Dan Gilroy’s “Nightcrawler”; Robert Downey Jr. and Robert Duvall in David Dobkin’s “The Judge”; and Al Pacino, who appears in both Barry Levinson’s “The Humbling” and David Gordon Green’s “Manglehorn.”

Actors who’ll come to Toronto playing real people — always a plus when it comes to awards season — will include Eddie Redmayne, who plays Stephen Hawking in “Theory of Everything”; Benedict Cumberbatch, who portrays the British intelligence worker who cracked Germany’s Enigma Code in World War II in “The Imitation Game”; Paul Dano and John Cusak, who play the younger and older Brian Wilson, respectively, in Bill Pohlad’s biopic about the troubled Beach Boys mastermind, “Love & Mercy”; Reese Witherspoon, who plays author Cheryl Strayed in Jean-Marc Vallee’s “Wild,” based on Strayed’s true-life story; and Tobey Maguire and Liev Schreiber, who play chess grandmasters Bobby Fischer and Boris Spassky in “Pawn Sacrifice.”

The late James Gandolfini’s final screen appearance, alongside Tom Hardy and Noomi Rapace in “The Drop” from “Bullhead” director Michael R. Roskam, will have its world premiere at TIFF as well.

Alan Rickman’s “A Little Chaos,” with Rickman, Kate Winslet and Stanley Tucci, will close the festival.  The opening-night film will be announced “shortly,” according to Bailey.

And “Daily Show” anchor Jon Stewart’s directorial debut, “Rosewater,” will have its Canadian premiere at the festival.

The lineup also includes a number of films that screened at previous festivals, including “Maps to the Stars,” “Foxcatcher,” “Mr. Turner,” “Force Majeure,” “Wild Tales” and “Coming Home” from Cannes, and “Whiplash” from Sundance.

The announced galas include “The Equalizer,” “Foxcatcher,” “The Judge,” “A Little Chaos,” “Maps to the Stars” and “Pawn Sacrifice,” as well as Mike Binder’s “Black and White,” a custody drama with Kevin Costner and Octavia Spencer; “The Riot Club,” from “An Education” director Lone Scherfig; and “This Is Where I Leave You,” a comedic drama directed by Shawn Levy and starring Jason Bateman and Tina Fey.

Rounding out the galas are the South Korean film “Haemoo” and two French films: “The New Girlfriend,” from director Francois Ozon, and “Samba,” from Olivier Nakache and Eric Toledano.

While the lineup is a solid start for the largest, most well-attended and busiest of the fall festivals, it is missing a number of high-profile films that were considered potential awards contenders and possible festival bookings.

Toronto will reveal additional titles every Tuesday for the next few weeks, with future announcements including documentaries, foreign films, Canadian films and special talks and conversations. Typically, additional galas and special screenings are announced as well, as the festival heads toward its usual slate of more than 300 films.

The last seven Oscar winners for Best Picture have all screened in Toronto.

Of the other major fall festivals, the Venice Film Festival, which will open with Alejandro Gonzalez Inarritu’s “Birdman,” will announce its full lineup on Thursday. The New York Film Festival has revealed that it will open with David Fincher’s “Gone Girl” and close with “Birdman,” with Paul Thomas Anderson’s “Inherent Vice” occupying a spotlight gala slot as well. The Telluride Film Festival does not announce its lineup until the day before the festival, which begins on Aug. 29.

In the past, films have been able to play Telluride in “surprise” screenings without jeopardizing their announced Toronto premieres. This year, though, Toronto officials have barred films that play the smaller festival from the coveted first-weekend spots in their fest.

A TIFF spokesperson told TheWrap that its “World Premiere” and “North American Premiere” designations take Telluride into account, meaning that most of the films announced on Tuesday will not be playing the  Colorado festival.