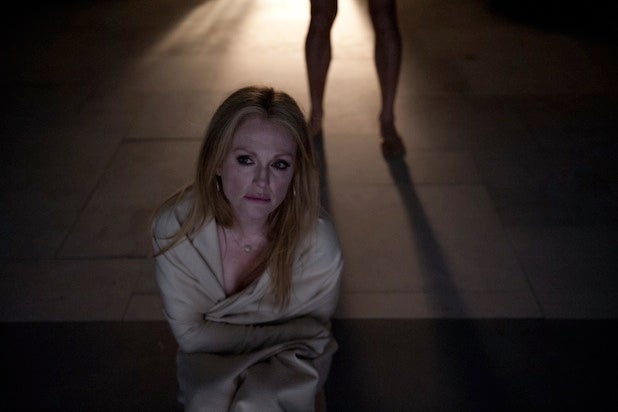 David Cronenberg is an artist unafraid of the dark side. One of the wondrous things about his work is just how deep and dark he will go, to the point where he could turn a remake of “The Fly” into an unexpected masterpiece about the agony of love and the arrogance of man.

His Cannes entry, “Maps to the Stars,” returns in a way to territory Cronenberg explored in “Dead Ringers,” and it’s probably the director’s best film in at least a decade. Here, working with the talented literary satirist of Hollywood culture, Bruce Wagner, Cronenberg has hit his stride in a big way. He nails our celebrity-obsessed culture, and the sickness it breeds, right to the wall.

“Maps to the Stars” is a labyrinth of oddly tossed-together characters, or maybe you could call them archetypes. Nothing is ever what it appears, however, as this is the land of make-believe. Julianne Moore plays Havana Segrand, a 40ish actress on the verge of a nervous breakdown, whose career apparently hinges on getting a role playing her dearly departed mother in a remake of the film that made her mother famous. “Stunt casting” is the fear the producers have, but it is all Havana wants in life.

In need of a personal assistant – aka a “chore whore” – she somehow finds Agatha Weiss (Mia Wasikowska), who became friends with Carrie Fisher on Twitter. (Yes, really).  Agatha does a good job for Havana and the story unfolds from there.

Agatha, we come to learn, is part of a family that includes John Cusack as the father, Olivia Williams as the mother and the showstopper, Evan Bird (remember his name) as the child star Benjie Weiss, whose bad behavior is leading him to the brink.

This wouldn’t be so bad, of course, if the rest of the city weren’t also buying into all manner of self-obsession.  Cusack plays a self help guru who “has the answers” to everyone’s problems and works them out violently (on Moore) to help the healing process. All he cares about, all anyone here cares about (save Wasikowska) is how they can grab onto one tiny piece of the pie.  The desperation is palpable. The ugliness, everywhere.

The only thing that prevents these characters from selling their souls entirely to Satan is that many of them begin to see visions. Their unconscious minds, or their moral compass, produce spirits and those spirits somehow haunt them, Scrooge style, into realizing the errors of their ways. Does that fix things? Well, no. They are seen as just a buzz kill.

To that end, “Maps to the Stars” dips elegantly into the surreal and the real, bobbing in and out of both effortlessly. You never see the strings. Much of this is clearly due to the writing — this is one hell of a script. But it is also a well-oiled machine, with actors knowing exactly what tone is required and a director who, of course, can’t help but dive right in.

The current state of celebrity obsession was handled beautifully in “The Bling Ring,” which played at Cannes last year. But Sofia Coppola’s subtlety as a filmmaker seemed lost on the critics. There can be no such doubt about Cronenberg’s vision of how Hollywood has collapsed into itself, eating its young, leaving no one left with a clean conscience.

See photos: America Ferrera Felt Violated by Man Who Crawled Under Her Dress at Cannes

The acting once again brings strong women roles to the forefront.  Julianne Moore does what she always does as an actress — throws herself into it completely. She embodies a certain kind of desperate actress that has probably been around since the beginning of Hollywood.  With her Vicodin and her Cozy Shack puddings, her mediation and her self-help books, she’s shameless in her desire to keep working, to be valued beyond the fringe. (Anyone who lives in LA knows the type.)

Cusack is appropriately creepy as the father, and Williams is solid. To say any more about them is really to spoil things.  Robert Pattinson has a small part, but gets a love scene, of course, to satisfy his fans. Pattinson and Cronenberg are developing a nice collaboration, however, and here’s to hoping we get to see more from the two of them.

Wasikowska is the film’s only glimpse of a moral center – odd, given what we learn about her. But there is a mystery to her performance, with so much of who she is has been buried so deeply it might never come out. Wasikowska expertly reveals some of that mystery, briefly, but you never know if she’s telling the truth or if she’s just crazy.

Finally, it must be said that Evan Bird’s scenes are among the film’s most entertaining. Much of this has to be credited to Wagner. If you’ve ever read his books you sort of know what to expect – but Bird is off-the-charts brilliant as off-the-rails child star who has spent his life in a relentless pursuit of fame for which he wasn’t anywhere near ready. He’s only 13 and already he’s been to rehab, had casual sex, and made $350,000 per episode on a television show.

“Maps to the Stars” might be disturbing to those who don’t yet realize the corrupt and repugnant culture of celebrity we’re all living through right now. But Wagner slips in the most exquisite prose, which blows through the film like the Santa Ana winds scented with jasmine, California style. It is in these moments that the film is elevated beyond black comedy into existential surrealism.

Graphic, sexual, brutal and very nearly soulless — these are hallmarks of the best of the films by Cronenberg, the master of alienation. So many of his characters just want a normal life. In this film that’s Wasikowska — but she sees too much. She knows too much.

Probably the most exciting, unexpected surprise of the film festival so far, “Maps to the Stars” is about reaching upwards to something you’re never supposed to touch. You can buy a map but you’re never really meant to see what’s beyond the gates.  We need stars to remain where they are — unimaginably far away, shimmering in the night sky. But a star is really just a ball of fire.  If you get too close you get burned. This might not be the happy ending we’re seeking, but Cronenberg and Wagner give us the one we deserve.

NOTE: This story was originally and inadvertently posted under Steve Pond’s byline. In fact, Sasha Stone wrote it. Apologies to Sasha for the mistake.