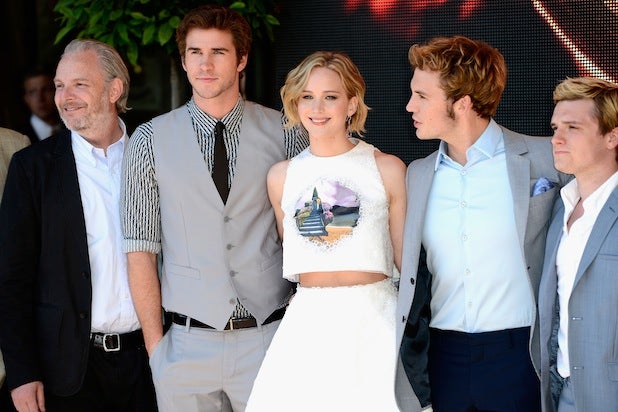 “The Hunger Games: Mockingjay Part 1” is not officially part of this year’s Cannes Film Festival, but they’ve dominated the visuals all week with their huge display in front of the Majestic. And on Saturday night they did it in the flesh, throwing a big bash and showing off some footage from the massive blockbuster-to-be.

But in even bigger celebrity Cannes news, Jennifer Lawrence met Justin Bieber at the Saturday night Vanity Fair party at the Hotel du Cap. It would have been a veritable pop-culture meltdown if only some photographers had been on hand to document the event. But VF reports that J-Law declined to have the encounter immortalized.

Question: If two stars have a conversation but it’s not photographed, did they really meet?

In more arcane but equally impressive Cannes news, Terrence Malick is in the house.

Mind you, he’s here as a salesman.

In one of the festival’s quietest major appearances on the Croisette, the famously low-profile director showed up to hawk his long-in-the-works documentary “Voyage of Time” to international and U.S. buyers.

Malick’s new movie, “Knight of Cups,” would have been a lock for the official competition if it were ready in time – but Malick being Malick, painstaking to a degree that frustrates festival directors everywhere, he hasn’t finished it yet. The man who left town before the awards ceremony that handed the Palme d’Or to his last Cannes film, 2011’s “The Tree of Life,”) has nonetheless dropped in on the festival, leading to tweets like these from Hollywood Elsewhere’s Jeff Wells:

I just said hello to Terrence Malick on the Croisette…honest. Shades, white-ish gray hair, dressed in summer clothes, talking to some guy.

I looked at Malick as I passed by and he looked at me. “Hey, Terry,” I said, & he said in that soft Oklahoma accent. “Hey, how ya doin’?”

That brief “Hey, how ya doin’?” is the only official word we’ve heard from Malick during his time in Cannes. When he showed a few minutes of footage from “Voyage of Time” to a couple of dozen buyers, no press were allowed, and one person at the session says that even cellphones were confiscated before Malick showed up or the footage was shown.

Also read: Tommy Lee Jones’ ‘The Homesman’ Is Haunted by How the West Was Won

Malick introduced the clips himself, surprising those who’d been invited by the Wild Bunch sales agents. The film purports to cover the history of the universe, and a buyer reported that the footage shown footage consisted of dazzling effects work and gorgeous shots of natural wonders ranging from landscapes to the human eyeball. Cate Blanchett supplied the narration.

Malick has reportedly been working on the film since the 1970s, and it sounds as if it might be the inspiration for the creation-of-the-universe sequence in “Tree of Life.”

So did he wow the crowd and land a deal? According to the buyer who was present, the footage was spectacular, but there probably wasn’t enough of it to tempt anyone into making a substantial offer.

Now, if Jean-Luc Godard keeps his promise to Cannes’ Thierry Fremaux and actually shows up for the premiere of his “Goodbye to Language” on Wednesday, Cannes will really have an impressive twofer of legendarily elusive directors.

Moving on to folks who want to be seen on the Croisette,

Meanwhile, Jessica Chastain – who’s worked with Malick but had idea he was in town – showed up for the premiere of a new version of a film she starred in and produced, Ned Benson’s “The Disappearance of Eleanor Rigby.” Hitfix’s Gregory Ellwood called Chastain “simply exquisite,” suggested that another Oscar nomination would be “genuinely deserved,” while Awards Daily’s Sasha Stone (who is also covering Cannes for TheWrap) wrote, “I found was something films have been sorely lacking for a few years now: women.”

Before the Cannes lineup was announced speculation was that Abel Ferrara’s “Welcome to New York,” his chronicle of the sexual appetites that led to the downfall of International Monetary Fund chief Dominique Strauss-Kahn, was going to be an official selection. It wasn’t, but that didn’t stop Ferrara from bringing his film to the festival for private screenings.

And to hear Indiewire’s Eric Kohn tell it, it’s a good thing he did. His review begins this way: “A deliriously entertaining political cartoon in B-movie clothing, Abel Ferrara’s ‘Welcome to New York’ is laughable and grotesque to the extreme, sometimes threatening to crumble under the weight of its monstrous protagonist, but those same factors give it an unnerving immediacy.”

In a bow to the schlockier side of Cannes, the festival is screening “The Go Go Boys: The Inside Story of Cannon Films,” Hilla Medalia’s documentary about the ’80s film company run by Menahem Golan and Yoram Globus. At Thompson on Hollywood, Tom Christie wrote, “There’s nothing particularly special” about the film apart from its subjects – but nonetheless gave credit to what he called a “straightforward, unaggressive documentary.”

Also read: Moguls on a Boat at Cannes: TheWrap’s Guide to Captains of the Cote d’Azur

While the scarcity of female directors remains a problem at Cannes, this year’s crop of two film directed by women in the main competition and four in Un Certain Regard hasn’t led to organized protests or petitions the way it has occasionally done in the past. But at a Saturday Cannes workshop sponsored by the European Audiovisual Observatory, according to Screen Daily, a number of speakers suggested that the only way to improve the standing of women in the film industry was through the use of quotas.

Citing an EAO report unveiled at the conference, Italian producer Tilde Corsi said, “I’ve never been an advocate of quotas, but after hearing these figures, I am beginning to think they make sense.”

Sunday, by the way, will bring the debut of precisely one film directed by a woman, Italian director Alice Rohrwacher’s main-competition title “La Meraviglie” (“The Wonders”).