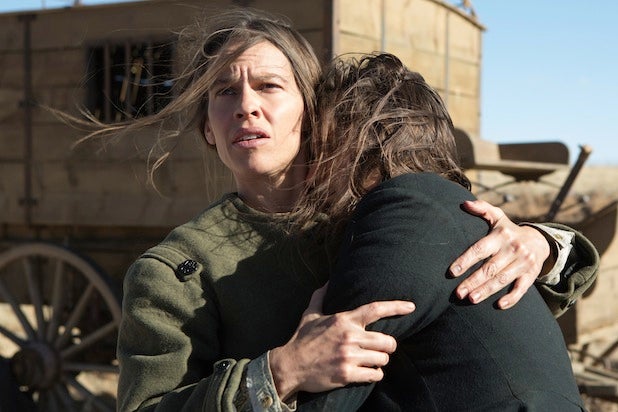 The immorality of a supposedly moral people is a part of our American story we often don’t tell. But Tommy Lee Jones‘ “The Homesman,” which works as an entertaining Western, is also a subtle commentary on a darker moment in American history, when we stole the land outright from Native Americans and justified all of it with Christianity.

The film, which is playing in the main competition at Cannes, uses the treatment of women as a backdrop, with Native Americans being the thing they most feared. The truth was that much of what they needed to fear was what they brought with them.

“The Homesman” is about our past, about the crimes committed under the patriarchy, but it is also about the little-told story of what those events did to the women who either tried to settle a homestead on their own, or else were taken there as a young bride and meant to provide children and wifely duties for men.

It is an intricately designed film, unpredictable in its execution and refusing to fall into any genre. If anything, it comments on those familiar tropes in Western films.

Half funny, the other half stark and tragic, the film shows that Jones has become a formidable director as he explores a topic that is clearly close to his own heart.

The film follows the story of Mary Bee Cutty (a most excellent Hilary Swank) who takes it upon herself to homestead her own land. She can shoot, she can cook and clean, she can stand up to any man – but still, she is ultimately defined by whether or not she can attract a man for marriage, for protection, for help and perhaps for a little physical attention.

She is a strong woman, the kind we don’t see in Hollywood films anymore (of course), but her fragility is also part of her identity as a woman.

Cutty elects to drive three women who have gone insane (played beautifully by Grace Gummer, Miranda Otto and Sonja Richter) across the country to the east, back to the other side if the Missouri River where they started, to join the church and eventually, their families.

This resourceful woman knows she can’t make it on her own, so she brings along Tommy Lee Jones to help, paying him $300.  He acts as though he’s only in it for the money, resisting any stray urges toward kindness to Cutty or the women. But as the story unfolds his humanity is revealed. Does that mean he’s a changed man? Maybe. It’s complicated.

The film is full of competing ideas that sometimes work against each other. Does it unfold in unpredictable, sometimes contradictory ways? Yep. Does it often inject images and plot points that don’t make apparent sense? Yep. Does it hover somewhere between comedy and tragedy? It does.

Does it ultimately work? Absolutely.

In many ways, America is defined by its Westerns. And in American cinema, many of the Westerns we remember and treasure perpetuated the lies of the founding of the west – what Jones called in a Cannes press conference “the imperialism of the time under the cloak of manifest destiny.” That is perhaps what makes “The Homesman” such an exciting film to watch – you think you know where it’s going until you realize it’s going somewhere else entirely.

At some point, you abandon all notions and let the movie take you where it wants to go.

What we don’t get much of anymore is complex storytelling in American cinema, where the answers aren’t readily given and those who view the film are required to form their own opinions about what they’re seeing on screen. But this filmmaker, with this film, is doing what filmmakers did when that kind of ambiguity and complexity was valued over commercial prospects.

The cast is excellent. Swank is always at her best when appropriately cast; that’s something that has happened a handful of times, two of which earned her an Oscar win. It seems likely she will get a nomination once again provided the film gets a fair shake. Jones is magnificent, as usual, and James Spader and Meryl Streep turn in wonderful cameos.

“How much can a person take?” That is what Swank says about her character. And indeed, we are only human in the end and we can only take so much.

The American West was a hard settling, a brutal movement that helped build the world we now enjoy.  The bones are buried underneath, and this film excavates them.