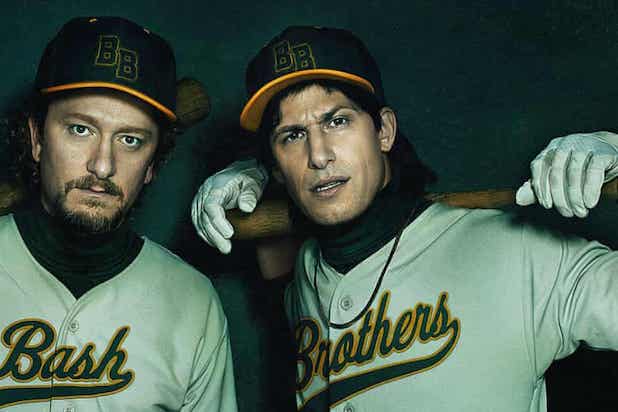 And it’s not just any album, it’s basically their version of Beyonce’s “Lemonade.”

The Lonely Island’s latest album is “The Unauthorized Bash Brothers Experience,” in which Samberg and Schaffer play (for some reason) Oakland A’s sluggers Jose Canseco and Mark McGwire respectively in a goofy, ’80s-themed “visual poem.”

“In 1988, Major League Baseball was set aflame by Jose Canseco and Mark McGwire, a.k.a. The Bash Brothers,” the opening title card reads. “They were known for their towering home runs and mind-bending play, but what many don’t know… Is that they recorded an album… of raps.”

The 30-minute short is a live-action music video, album or however you want to classify the new “visual album” idea that Beyonce was among the first to pioneer. Schaffer directs the album with Mike Diva, and the video also includes cameos from Maya Rudolph, Jenny Slate, Sterling K. Brown, Sia, the Haim sisters, Stephanie Beatriz and Jim O’Heir.

And the album is absurd even for them, the guys who brought you instant classics like “I’m On a Boat” and “Popstar: Never Stop Never Stopping.” Here’s a taste of their song “Oakland Nights,” in which, again, they are dressed in uniform as Canseco and McGwire.

“Tell the maitre’d at your booty to expect me/I’m solo and I’m flexing, but don’t try and solo flex me/Nordic Track all day,” Samberg and Schaffer croon.

Jose Canseco even watched the “Bash Brothers” video himself and fully endorsed it, offering to do a follow-up video should they want to. And they’re game too.

“This tweet genuinely made our year,” the group tweeted. “We love you. Thank you, sir!”

This tweet genuinely made our year. We love you. Thank you, sir! https://t.co/FEVIgDp3ML