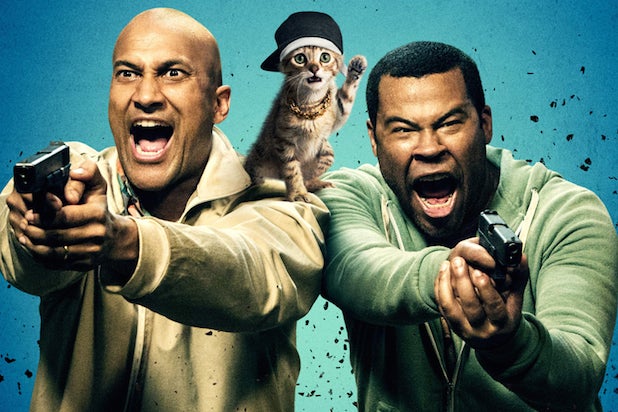 Keegan-Michael Key and Jordan Peele‘s new big-screen comedy “Keanu” wasn’t always named for an adorable kitten who shared the moniker of one of Hollywood’s most laid-back movie stars.

The first few versions of the script were kitten-less and titled “Real Hard Motherf***ers,” said Alex Rubens, who co-wrote (with Peele) the script about two guys who pretend to be gangsters in order to get what they want.

But as Rubens recalled, he and Peele agreed that the story was missing a key element for Peele’s character, Rell. “He said, ‘Hear me out. This might sound stupid but what if Rell is trying to rescue his stolen kitten?'” Rubens told TheWrap. “I thought it was perfect.”

As for naming the cat for “The Matrix” star Keanu Reeves, Rubens credited Peele again. “I specifically remember sitting in the living room of my old apartment and Jordan said, ‘For some reason I feel like the cat should be named Keanu.'”

“It’s a ridiculous name,” Rubens said. “If our comedy movie did not exist — because I think we ruined the name for cat owners by making it — it would be a great name for a cat.”

It’s no secret that once the actual Keanu Reeves saw the trailer, he was impressed. But what comes next is something of a spoiler — so don’t read on if you don’t want to ruin a choice sequence in the new movie!

The “Keanu” filmmakers reached out to Reeves to participate, but he initially declined. Though after he saw the trailer, the star agreed to lend his voice to his namesake kitten.

“We were all very excited when Keanu could do some lines — not cocaine,” Rubens joked. “We had a lot of fun brainstorming.”

Reeves recorded a bunch of different lines as options to appear in a trippy drug sequence in the film. “There were a lot of possibilities,” said Rubens, who was also a writer on Key and Peele’s eponymous sketch comedy show on Comedy Central. “I didn’t know what was used until the premiere when I saw the finished film.”

Although the trailer for “Keanu” looks a lot like “Key & Peele” skits that have gone viral, like their famous “Liam Neesons,” Rubens insisted that he and Peele didn’t simply expand a TV sketch but developed the story as full-length feature from the start.

Also Read: Why Keegan-Michael Key Is Not Just Another Funny Face

And Rubens already has ideas for a sequel if audiences lap up “Keanu” this weekend. “I’d like it to have a hard left turn with them fighting aliens or something,” he said. “It’s ideal to keep it fresh.”