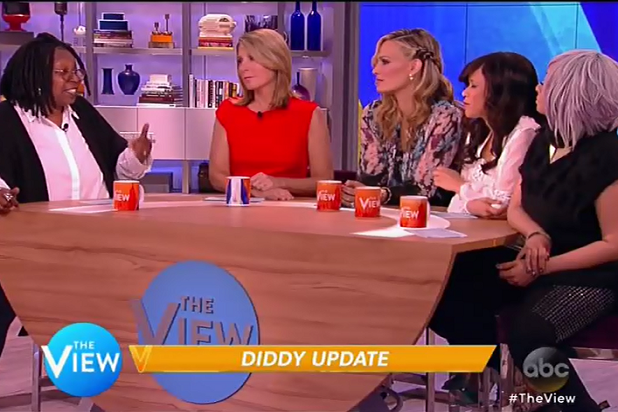 Whoopi Goldberg and her cohorts on “The View” took on Fox News personality Bill O’Reilly on Thursday’s episode of the ABC talk show, cautioning the “O’Reilly Factor” host not to sidestep the prevalence of racism in America.

The conversation was sparked by a clip of O’Reilly telling a guest, “Most Americans are not racist.”

While the “View” panel by and large — gasp! — agreed with O’Reilly, Goldberg warned that denying the extent of racism’s impact in the United States would be a mistake.

“For the most part, if you look around at what’s happening, everybody in this country is not racist, but they are here,” Goldberg said. “Let’s not pretend that it’s not there, Bill.”

“A better point is that you cannot be racist and good; it’s the worst thing you can say about  someone,” Nicolle Wallace added. “I think Bill O’Reilly‘s point is that we are a good nation; you can’t paint the nation with this broad [brush].”

Rosie Perez opined that the increased opposition to racism in America, fueled recently by exhibitions of the Confederate flag and the tragic church shooting in Charleston, South Carolina, is a positive development to be celebrated.

“People are coming out and saying, ‘Enough is enough,’ so why don’t we talk about that, and why don’t we celebrate that?” Perez asked.

Elsewhere during the episode, the “View” crew discussed the recent arrest of Sean “Diddy” Combs, after he allegedly assaulted a coach with a kettlebell at UCLA, where his son is on the football team.

Goldberg wondered whether Combs’ son Justin was treated unfairly because of his father’s fame.

Also read: 'The View's' Whoopi Goldberg Issues Jeb Bush Challenge: 'You Need to Get up in Trump's Face'

“The former UCLA coach claims that part of the reason he recruited Diddy’s son is because of Diddy’s fame,” Goldberg reflected. “Is this possibly why the coach was tougher on him? Was he as tough on the kids of non-famous parents?”

Nonetheless, Goldberg added, there are better avenues for Combs to express his displeasure over his son’s treatment.

“Where does the responsibility fall for the parent to go to the head of the school and say, ‘Hey’ —  without the kettlebell– and say. ‘This is what’s happening to my kid.’ If only because you are a famous person, and no matter what you do, somebody’s going to blame it on you.”

See video: 'The View's' Whoopi Goldberg on Donald Trump: 'If You Pee on Everybody, You Can't Tell Them It's Rain' (Video)

Acknowledging that all of the facts in the case still have not come to light, Goldberg offered, “Diddy, come on and tell us what happened, baby. Come on.”