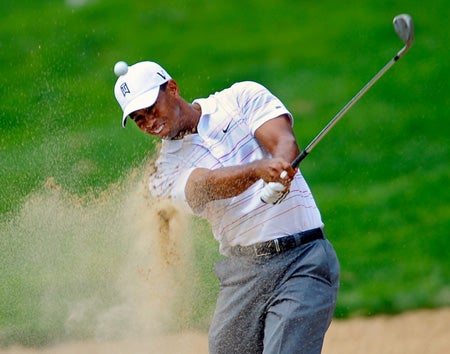 Even on a day when there’s no real news in the Tiger Woods saga, there’s controversy.

On Tuesday, the New York Times published a story about Anthony Galea, a Canadian doctor and “pioneer” in the field of sports medicine who had treated Woods and other top athletes, is the target of a criminal doping investigation — “suspected of providing athletes with performance-enhancing drugs.”

Galea said Woods "was referred to him by the golfer’s agents at Cleveland-based International Management Group, who were alarmed at the slow pace of Mr. Woods’s rehabilitation after knee surgery in June 2008."

When they asked about Woods’ relationship with Galea, as blogger Stephanie Wei noted, the Times got a weird response from Mark Steinberg, of Tiger’s rep at I.M.G.:

“I would really ask that you guys don’t write this? If Tiger is NOT implicated, and won’t be, let’s please give the kid a break.”

After the story was published, Steinberg fired off a firmer statement:

The New York Times is flat wrong, no one at IMG has ever met or recommended Dr. Galea, nor were we worried about the progress of Tiger’s recovery, as the Times falsely reported. The treatment Tiger received is a widely accepted therapy and to suggest some connection with illegality is recklessly irresponsible.

Elsewhere in the fast-moving world of Tiger …

People magazine will report in its Friday issue that Tiger’s Swedish wife Elin Nordegren has plans to divorce Woods. Unnamed sourcing, of course:

“A source close to the golfer’s wife tells PEOPLE, saying, "She plans to leave Tiger.’ Another source says, ‘She’s made up her mind. There’s nothing to think about: he’s never going to change,’ PEOPLE reports.”

The People report stems, in part, from photos published by the New York Post showing Nordegren pumping gas without her wedding ring on.

Speaking of the Post, today’s cover – the paper’s 17th consecutive featuring Woods – is a story they already reported on the cover eight days ago: that Elin left the house.