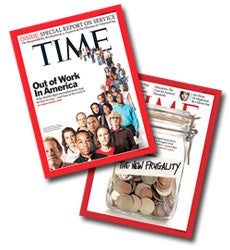 Ever since Condé Nast began to implement rolling cutbacks – part of a broad plan to slash up to 25 percent from its budgets to make up for a shocking shortfall in advertising – there have been rumors that Time Inc., the consumer magazine industry’s other mega-publishing pillar, would follow with layoffs of its own.

It appears that will be the case. Media Decoder says that Time Inc. will drop the hammer Wednesday, “coordinating its announcement with the third-quarter earnings report of its parent, Time Warner.” The plan is to slash about $100 million from Time Inc.’s budget – mostly from layoffs. That number, Media Decoder says, will be “significant.”

I asked Dawn Bridges, Time Inc.’s senior VP of communications, if there would be an announcement coming. "We’re not making any comments," she replied.

But I’m told by one person at the company that the cuts will be made before the earnings announcement, perhaps on Tuesday, so that executives can tell shareholders what was done, not what they plan to do. “Significant” was the same word my source used when I asked how many.

Which should be expected anyway. The last time Time Inc. did something like this, in October 2008, they cut roughly 600 people.

I’m told that unlike the Condé cuts, no magazines are expected to close.

Whatever the case, it’s not going to be pretty.

More Condé Cuts … at the Speed of Time Inc.