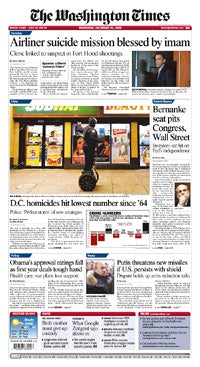 The Washington Times has laid off a number of high-ranking staffers, including managing editors Jeffrey Birnbaum and David Jones, assistant world and national security managing editor Barbara Slavin and others.

What’s more, the Washington Times decided to axe the sports section. According to the section’s Twitter feed, Friday’s print edition will be the last to include sports.

Ryan O’Halloran, the paper’s NFL beat writer, then tweeted this: “Times sports section is kaput. Make sure to call and cancel subscriptions after Friday.”

At a 3:30 p.m. meeting Wednesday, [president and publisher] Jonathan Slevin "spoke before staffers were given an envelope that basically informed them whether they were staying or going."

"None of us understand what the strategy is," Slavin told Politico, adding that the cuts have been done in a "haphazard way."

“With the ‘you’re getting fired’ packet, @washtimes was kind of enough to give a PINK sheet of paper with open jobs to apply for.”

Slevin’s announcement, released after the meeting:

A new, “refocused” print edition is slated for Monday.