Twitter added 20 million monetizable daily active users during the second quarter, up 34% year-over-year. Both the overall number of new users and the year-over-year growth were company records.

“The year-over-year increase in mDAU was primarily driven by external factors, such as continued shelter-in-place requirements for many people, and increased global conversation around the COVID-19 pandemic and other current events,” Twitter CEO Jack Dorsey said in the company’s letter to shareholders. 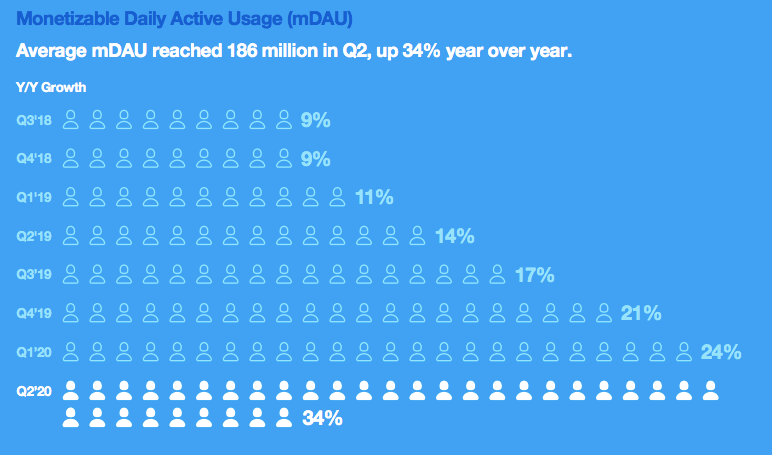 At the same time, the company reported Q2 sales of $683 million, coming in about $24 million short of analysts’ revenue estimates. Second quarter revenue was down 19% from the same time last year. In April, when Twitter reported its Q1 financials, the company warned the coronavirus pandemic had disrupted its ad business in the final weeks of March — an issue that looks to have carried over into Q2. The bulk of Twitter’s Q2 sales came from ad revenue at $562 million, which was down 23% year-over-year.

Twitter said ad revenue dipped during the final weeks of June, but that “demand gradually improved once brands returned after the protests subsided.”

The Q2 user growth appeared to offset the sales decline for investors, at least initially, with Twitter’s shares jumping 7% to $39.52 before the opening bell.

One interesting point that stood out in Twitter’s letter to shareholders is that it’s looking to potentially add a subscription service to drive more revenue. The company said that “although our exploration is very early and we do not expect any revenue attributable to these opportunities in 2020, you may see tests or hear us talk more about them as our work progresses.”

The San Francisco-based company reported a loss of $1.23 billion, which translated to a loss of $1.56 per share for Q2. Much of this was tied to a $1.1 billion loss stemming from a deferred tax asset. Twitter’s adjusted loss of 16 cents a share also fell short of analyst projections of a breakeven quarter.

Twitter acknowledged last week’s hack, which impacted a number of prominent users, from Barack Obama to Elon Musk, in its letter to shareholders. The company said it’s implemented “numerous safeguards” to improve security after the “very public and disappointing” lapse, without offering specific details. Twitter is also working with law enforcement as investigations are being carried out, the company added.

About 15,000 comments were removed during Q2 for sharing coronavirus misinformation, Twitter said.

Looking ahead, Twitter said its now-completed ad server rebuild should increase ad sales during the second half of the year.