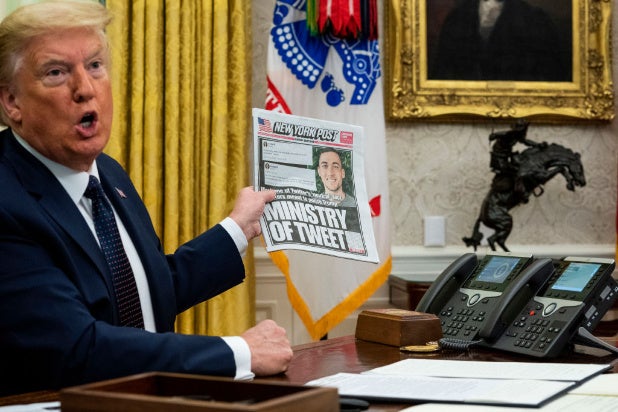 Looks like the gloves are off. Citing its “rules about glorifying violence,” on Friday morning Twitter placed a content warning on an angry tweet by Donald Trump that appeared to threaten the use of violence against rioters in Minneapolis.

We have placed a public interest notice on this Tweet from @realdonaldtrump. https://t.co/6RHX56G2zt

The riots on Thursday grew out of protests that erupted earlier in the week in response to the death of George Floyd, a Minneapolis man who was killed by police officers on Memorial day. The officers involved were fired, but no charges have yet been filed.

Late Thursday night, Trump weighed in on the latest developments in Minneapolis on Twitter, saying in a pair of tweets: “I can’t stand back & watch this happen to a great American City, Minneapolis. A total lack of leadership. Either the very weak Radical Left Mayor, Jacob Frey, get his act together and bring the City under control, or I will send in the National Guard & get the job done right…..These THUGS are dishonoring the memory of George Floyd, and I won’t let that happen. Just spoke to Governor Tim Walz and told him that the Military is with him all the way. Any difficulty and we will assume control but, when the looting starts, the shooting starts. Thank you!”

In response, the White House posted a screengrab of a tweet by Imam Sayyid Ali Khamenei, the leader of Iran, which read “The struggle to free #Palestine” is #Jihad in the way of God.”

One of the bits in the offending Trump tweet — “when the looting starts, the shooting starts” — is actually a quote. It comes from a December 1967 UPI article, and was said by the Miami chief of police, Walter Headley. The article is about the Miami police department using violent tactics to crack down on “Negro slum hoodlums.”

“We aren’t afraid of being accused of police brutality,” Headley said in the article, and credited his “when the looting starts, the shooting starts” policy with preventing “racial disturbances and looting” in response to the police crackdowns.

Twitter’s move marked an escalation in the very public argument between the social media giant and POTUS that started Tuesday, when it placed a fact check on two tweets in which Trump falsely claimed that mail-in voting leads to fraud. Trump raged about the fact check Tuesday night, complaining that Twitter had violated his free speech rights.

In response to the order, Twitter said: “This EO is a reactionary and politicized approach to a landmark law. #Section230 protects American innovation and freedom of expression, and it’s underpinned by democratic values. Attempts to unilaterally erode it threaten the future of online speech and Internet freedoms.”