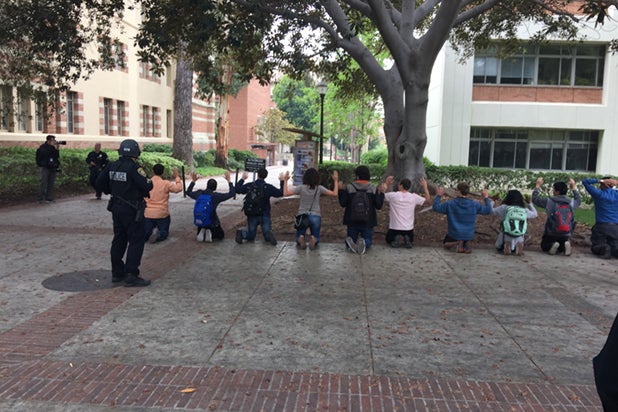 The fatal shooting at UCLA‘s Westwood, California, campus on Wednesday has been described by police as a “possible murder-suicide.”

Engineering professor William S. Klug, 39, has been named as the victim, with the second deceased yet to be officially identified by authorities.

Since early February, at least seven other shootings have been reported at universities and high schools across the U.S., from Arizona to Ohio.

High Point High School
May 6: Beltsville, Maryland
Eulalio Tordil, 62, is accused of killing three people and injuring three more during a two-day shooting spree. The victims included Tordil’s estranged wife, who police say he shot in view of one of her daughters, in the parking lot of High Point High School.

Antigo High School
April 23: Antigo, Wisconsin
Jakob Wagner, 18, wounded two students with a rifle as they were leaving the high school prom, according to a statement from the City of Antigo Police Department. Wagner later died at a nearby hospital from a gunshot wound inflicted by local police, but the two victims’ injuries were non-life threatening.

Tuskegee University
April 16: Tuskegee, Alabama
Tuskegee student Ras Hodari Akanbi Jacobs-El, 20, surrendered to police after opening fire in the parking lot of one of the university residential halls, according to a statement released by the university. The incident left two people injured.

Madison Jr/Sr High School
Feb. 29: Middletown, Ohio
Four students were injured after 14-year-old James Austin Hancock, who pleaded guilty to four counts of attempted murder according to Cincinnati.com, opened fire during lunchtime in the cafeteria of Madison Jr/Sr High School in Butler County. Two of the victims were shot directly, while the other two suffered injuries from shrapnel. Officials said Hancock will be sentenced June 6 in Butler County juvenile court.

Independence High School
Feb. 12: Glendale, Arizona
Two 15-year-old students, Dorothy Dutiel and May Kieu, were shot and killed in a murder-suicide at Independence High School in Glendale, Arizona. Dutiel was reportedly in a relationship with Kieu and shot her before ending her own life, according to a local NBC affiliate. Authorities released redacted versions of the suicide notes that Dutiel wrote detailing her relationship with Kieu and motives for the shooting.

Muskegon Heights High School
Feb. 9: Muskegon Heights, Michigan
Four people were injured in a shooting at the school’s parking lot following a boys’ basketball game. Clarence Jamichael McCaleb, 21, was arrested on charges related to the incident — including possession of a firearm, possessing a firearm while committing a felony, carrying a concealed weapon, and being a third-time habitual offender, MLive.com reported.