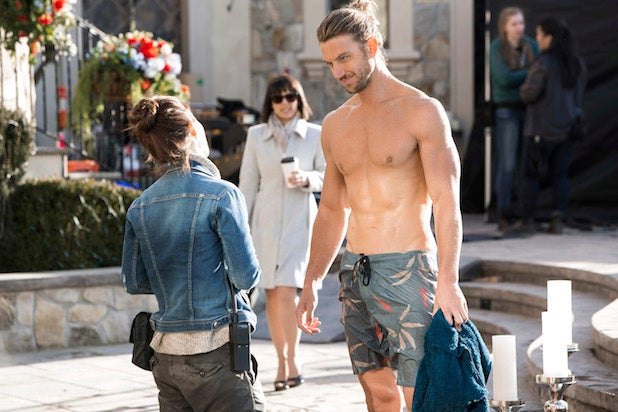 (Spoiler alert: Please do not read ahead unless you’ve seen the season 3 finale of “UnREAL” that aired Monday.)

“UnREAL” got pretty darn real in its Season 3 finale on Monday. The two back-to-back episodes saw drama on-screen for Serena (Caitlin FitzGerald) and her suitors and off-screen for Quinn (Constance Zimmer), Rachel (Shiri Appleby) and the rest of the “Everlasting” production crew, with Rachel even leaving the show all together come episode’s end.

One of the catalysts for another bit of fuss was Adam Demos’ outspoken Aussie August, a contestant vying for Serena’s affections. August expresses some beliefs on-camera about the military and fellow suitor Owen (a veteran played by Alex Hernandez) at a fundraiser that don’t sit well with everyone. Including Serena, who kicks him out of her Final Three on the spot.

Of course it’s revealed that all of this was set up by Rachel to create a distraction on behalf of Quinn, who was about to be fired from the network in public at the shindig. And, as you’ll remember, these are the two women August had a love triangle with earlier in the season.

Because Demos is already set for Season 4 of “UnREAL,” TheWrap had to get to the bottom of how he felt about that awkward exit and what his return for a game of “Everlasting: All Stars” will mean for Rachel and Quinn.

“You got to see August going on, and myself and Alex pick their sides and what they truly believe in and go head to head,” Demos tells TheWrap. “I thought it was cool because of that. But it was unfortunate that Serena didn’t choose me [August] because the bond that she had with August was, she was able to let go of that so called ‘real world.’ And August is free living. So I feel it was a shame that came to a head and she felt like she had to go back to what some people call a normal life.”

When Demos returns in the fourth installment it will be to get back into the “Everlasting” game once more, despite that awkward exit. And this time it’s for a special edition of the reality dating series.

“‘Everlasting: All-Stars’ is made up of the audiences favorite previous contestants, so [the writers] have made up ones from the previous seasons and so I come back for that reason because I’m a fan favorite,” Demos says. “But also, August comes back himself, you think it’s stupid for him to go back after being manipulated, but he comes back to promote his brand. Because as funny as it all was, he actually does start up these companies and start making money for these charities.”

“So he comes back to build his profile, but then on top of that, the ‘UnREAL’ writers bring him back because the dynamic he had with Rachel and Quinn was so strong — good and bad — that it’s going to be so much more,” Demos continued. “And the relationship with Quinn and Rachel goes so much deeper and so much further. And it is the catalyst for a lot of big things that happen in Season 4. The whole point of ‘UnREAL’ is Quinn and Rachel, so if you aren’t part of their storyline there is no point. But August has a big part in that in Season 4.”