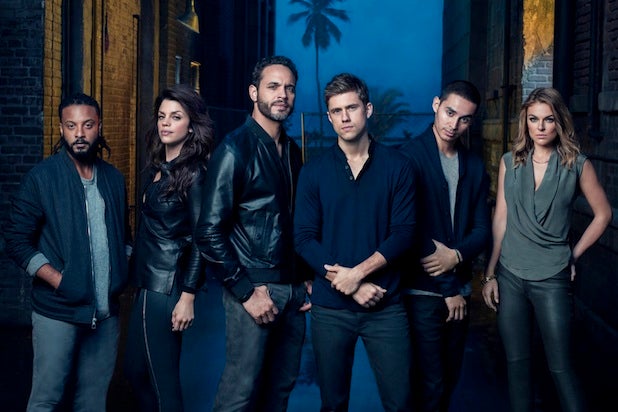 In its first season last summer, “Graceland” was already a departure from the usual USA Network fare.

Shot darker and grittier than the network’s viewers were used to, the show ventured into some hardcore drug storylines, which included addiction and murder.

Fans of the show should expect “Graceland” to go even further in that direction on Season 2, which debuts on Wednesday.

“We really to take the show darker for the USA network, it was really pushing some boundaries and this season gets really dark,” Eastin told TheWrap. “Episode six and nine, which may be professionally the best thing I have ever worked on, I mean they get incredibly dark, much darker than anything we did last year by far.”

“Graceland,” which follows a group of federal agents from different divisions who live in a beach house together, ended its first season with its main character, Briggs (Daniel Sunjata), ending a longtime crusade against a murderous drug kingpin with the help of Mike (Aaron Tveit), a DC plant assigned to spy on Briggs under the cover of a new recruit.

Here are six ways Eastin said “Graceland” will be darker on Season 2:

1. Show delves into the stories of the roommates.
“We really wanted to play up the ensemble,” Eastin said. “We realized that we wanted to go with our really strong cast. The other couple things were that we really wanted to play up the serialization of the show this year. We went away from being ‘case of the week’ and really dive into the characters and really make it about the characters. So, that is one of the things we discovered was that people really seemed to like serious mood of the roommates and that was more interesting than the ‘case of the week’ stuff.”

2. The audio of Briggs killing a federal agent he thought was his longtime enemy is still out there.
“Briggs did a bad thing and that tape really represented that. The tape sort of bounces around for a bit, and sort of sits there as this unlit fuse. And, later in the season right around episodes nine and 10 is when it really comes back into play in a big way. It’s not going to come back in the traditional way where the bad guy gets a hold of it to blackmail Briggs. It’s got a really unique re-entry into the story point and it sort of lights the fuse for a big explosion that happens at the end of the year.”

3. Returning from DC, Mike’s new role in the house causes strife.
“Mike kind of takes over that alpha male role in the house Briggs occupied and finds it much more difficult than he thought it would be. Most of the roommates don’t like him, they are angry. And as things begin to break down for Mike, he realizes that what he needs to keep to stay alive and afloat is that he needs that ‘Bad Briggs’ back. It’s really pushing him there that brings the thematical situation that comes between the two guys this season.”

4. Johnny (Manny Montana) finds himself in the hot (and steamy) seat.
“Johnny is one of the most interesting stories we have this year,” Eastin said. “Episode 3 is where you really see what begins to happen with Johnny. Johnny begins a very interesting love triangle between three of the characters. It’s really, really intense and pretty unique for USA… We were talking and he said, ‘You know what Jeff, push me, man. Put me in those situations where you just make me uncomfortable man.’ And I was like ‘OK, we can do that [laughing].’

5. Jakes’ (Brandon Jay McLaren) quest to reclaim his son doesn’t go well.
“He opens up Episode 6 just in a really bad state and then that free fall sort of continues down until ultimately–lets put it this way, his free fall continues until it almost gets one of the other roommates killed. It comes very close, which is an entire episode and at that point he realizes he needs to change his ways.”

6. Meet the new big, bad crime family.
Last year we had Bello (Gbenga Akinnagbe) and the Caza Cartel, this year we have the Solano Family, which I think they are great. We got Nestor Serrano who plays the father who is fantastic and then Carlito, who is played by Erik Valdez, may be the best guest cast we have had on the show. He is absolutely fantastic. He gets into a really volatile and personal relationship with Johnny, which puts Johnny in a very interesting position of going under cover and not quite knowing how to deal with it. But also as it happens–a pretty intense relationship happens with the sister. (Refer to No. 4 above)