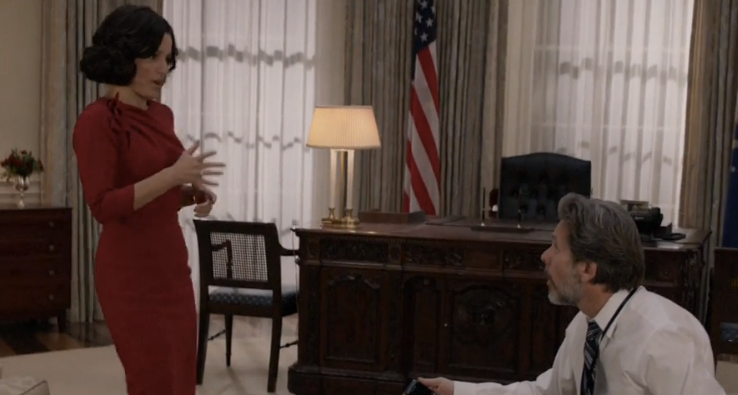 If you're looking for a show where politicians occasionally do some good, you might want to check out Netflix's "House of Cards." At least Kevin Spacey's conniving congressman does the occasional favor as he tries to slash his way to the vice presidency.

On "Veep," Julia Louis-Dreyfus' Selina Meyer already has the job — and it sucks. As the show returns to HBO Sunday for its second season, she's still abusive to her underlings, ravenously ambitious, and desperate for the POTUS to call. But she's also sleep-deprived after traveling the highways and byways of a country she doesn't seem to like, stumping for candidates she hates, trying to help the party she's ambiguous about win midterm elections.

The premiere takes place as those self-serving dreams are dashed, on election night and the harsh morning after. The stench of death is in the air.

"Apparently POTUS' chief of staff is telling everyone to write their will," one character says. Another fantasizes about being cryogenically frozen. Then comes this pronouncement: "Put everything in the wagons and shoot the dogs, because we have lost the House."

Have I mentioned "Veep" is one of the funniest shows on television? It is, because of the deadpan frankness with which it stares into a pit of petty avarice. There's nothing to do but laugh at the prospect of someone like Meyer in a position of such power and responsibility. But you're laughing through your tears, because, well.

Louis-Dreyfus won and Emmy for the role last season, and would be a safe bet for this one, too. Selina was a knife of a character from the first episode because Louis-Dreyfus and creator Armando Iannucci have made no effort to soften her with likability — or even good intentions.

Like so many of our leaders, Selina cared about issues once, probably. But now it's all about power and access. She competes with similarly insecure narcissists.

Most pathetic of all are the supplicants who try to win her favor. These are the characters we relate to the most, because some of them seem to have some idealism, or at least a willingness to pretend Selina's self-centeredness is a means to and end.

In order from most to least ruthless, they are Dan Egan (Reid Scott), Mike McClintock (Matt Walsh), Sue (Sufe Bradshaw), Amy (Anna Chlumsky), and Gary (Tony Hale). Presidential aide Jonah (Timothy C. Simons) is arguably more powerful than any of them, despite looking like a giant kindergartner.

Every one of them is excellent, with similar but uniquely formulated concoctions of fear, jealousy, and resentment that make any interaction potentially disastrous. In the premiere, we're treated to the spectacle of "My Girl" star Chlumsky and the most arrested of the "Arrested Development" clan, Hale, becoming desperate allies. But everyone gets their moment to shine, or at least have a public meltdown. The premiere finds Mike lamenting a foolish purchase as the ever-efficient Sue gets to turn her cold, barely-hidden contempt on the press.

The show manages to add to and improve on the mix with the addition this season of Gary Cole as number-crunching strategiest Kent Davidson and Kevin Dunn as breakdown-prone presidential chief of staff Ben Caffrey. Cole, of "Office Space" and "Brady Bunch" fame, tends to steal whatever he does, and poses the usual threat here as he exhaustedly outwits Selina at every turn.

Caffrey, meanwhile, gets to hide in a closet — his de facto bunker — and wait for the horrors to pass. Fortunately for us, they never do.